There can be a fine line between glory and despair in football. On Thursday night in West London, Germany's last team standing in Europe this season, Eintracht Frankfurt, discovered just how fine that line can be. 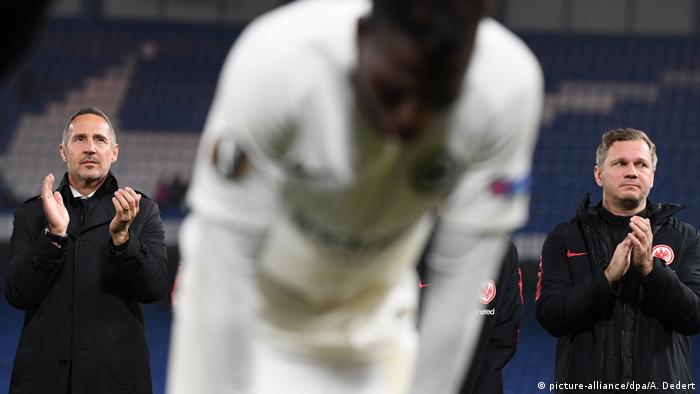 Eintracht Frankfurt departed the Europa League in cruel fashion, losing on penalties to Chelsea and missing out on their first European final since 1980 by the smallest of margins after a gripping contest. But you'd never have guessed that the manner of the defeat had been so brutal given the reception they were given by their superb traveling support before, during and after this epic tussle.

The Frankfurt fans had descended en masse from Hesse — and beyond — to get behind their team, and, had the game been decided by the strength of the support, Frankfurt would be cruising into the final in Baku. Every Frankfurt fan had taken their place in the away section, and some other parts of Stamford Bridge, well over an hour before kickoff, and remained there until well after the home fans had departed for Fulham Broadway station. The persistent London drizzle couldn't deter them.

There was a poignant moment after full time when Frankfurt's players stood shoulder-to-shoulder in front of their fans as they chanted in unison for a full five minutes. Make no mistake about it, Frankfurt leave the competition having done their fans proud and enhancing their European reputation in the process.

However, it will be Chelsea who take their place in an all-English Europa League final on May 29 in the Azerbaijani capital. Frankfurt went toe-to-toe with Chelsea, a club who have spent just €3 million ($3.4 million) less on midfielder Jorginho and goalkeeper Kepa Arrizabalaga than Frankfurt have spent in the last 28 years. These clubs have been operating in different worlds for at least the past two decades, and the mere fact that they ran Chelsea so close for 120 minutes demonstrates how far they've come in recent years.

That progress started under Niko Kovac and has accelerated under Adi Hütter, whose first competitive game in charge was a 5-0 German Super Cup humbling at the hands of Bayern Munich last August. Since then, Hütter has established a dynamic team whose forward line is comparable with some of the best in Europe right now and a work ethic that shows just how invested his players are in his methods.

Frankfurt, who were coming fresh off the back of a 6-1 capitulation in Leverkusen last weekend, looked weary in the first 45 minutes. They've seen their top-four charge crumble in the past few weeks and still haven't won in 90 minutes since the second leg against Benfica. The only chance they mustered in the first half was a sizzling volley from Danny da Costa that Arrizabalaga tipped over, but Chelsea were largely comfortable as they took a 1-0 half time lead into the halftime break.

The visitors came out strongly after the break though and that fresh impetus was rewarded with an equalizer in front of the traveling support soon after the break, with Luka Jovic demonstrating with an assured, ice-cold finish just why he is tied with Chelsea's Olivier Giroud as the Europa League's top scorer with 10 goals and has Real Madrid seemingly ready to part with a significant fee for the Serbian. 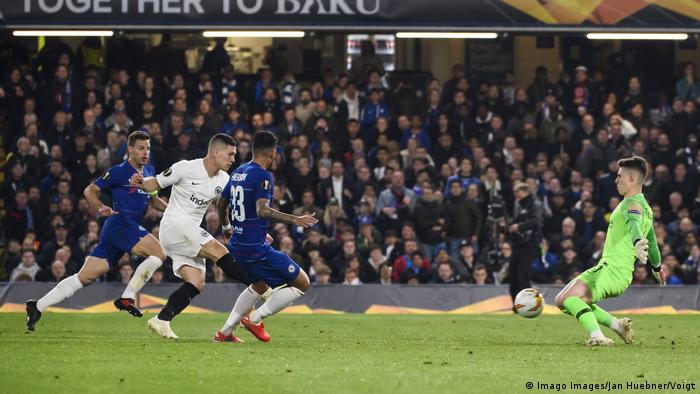 Suddenly Frankfurt were landing their punches and it was Chelsea who found themselves on the ropes, and dangerously exposed when they overcommitted in search of a second. Sebastien Haller came off the bench and added some calmness to Frankfurt's hold-up play and the spritely Mijat Gacinovic was key in knitting together Frankfurt's attacks. Haller came desperately close to stunning Chelsea when he saw two shots cleared off the line by David Luiz and Davide Zappacosta. If only Haller, just back from injury, had made cleaner contact on both occasions.

Extra time came and went and with neither side able to force the issue, penalties decided it - in Chelsea's favor. Frankfurt's players hung their heads and sank to their knees as Stamford Bridge erupted, and the realization hit home that this would be Chelsea's night.

When the dust settles on this defeat, Frankfurt will reflect on a Europa League campaign in which they have entertained and dazzled in equal measure. The high-octane style that Hütter has implemented suits the team perfectly, and they have proved that they are a team with personality and vigor. Assuming Jovic is sold this close season, Frankfurt have a huge opportunity to reinvest wisely and strengthen the team further, and build a team even more in Hütter's image.

And that would be nothing less than he deserves.