China’s yuan has become one of the world’s ten most traded currencies, a global financial report has found, underscoring the rise of the Chinese economy. While the US dollar remains market leader, the Euro has slumped. 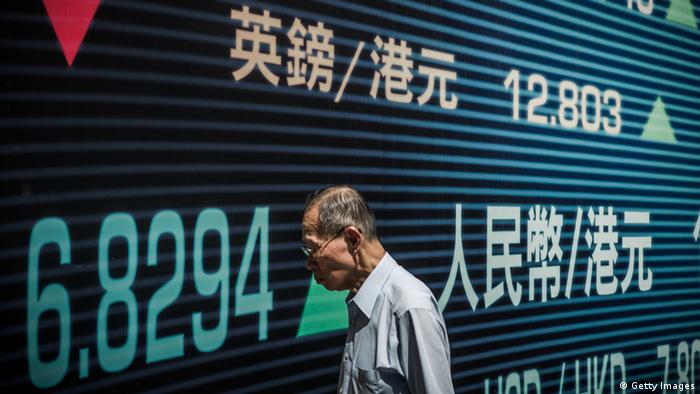 China's national currency, the yuan, made it into the top ten of the world's most important currencies, according to a report released by the Bank of International Settlements (BIS) on Thursday.

The yuan rose to become No. 9 on the list due to a significant expansion in foreign currencies (Forex) trading, said the Swiss-based bank, which is an international organization for central banks.

"Along with the Mexican peso, China's yuan has seen the most significant rise in market share among major emerging market economies," the BIS report said.

According to BIS data, in April this year the turnover in trades involving yuan reached $120 billion (91 billion euros) a day on average, which was three and a half times more than the $34 billion it achieved in 2010.

China eases controls over its currency

The currency is not fully convertible. But Beijing has loosened controls recently, allowing companies to settle international transactions in yuan.

US dollar remains on top while Euro drops

However, the significance of China's currency is still dwarfed by a number of other currencies, notably the US dollar.

The US currency had remained the uncontested global financial market leader, accounting for 87 percent of all currency trades in April with a daily volume of $4.7 trillion, the BIS report said.

The report also noted that the single European currency, the euro, dropped slightly in significance, achieving a market share of 33 percent, down from 39 percent in April 2010.

Overall, the volume of foreign currency transactions surged by about 33 percent over the past three years to an average of $5.3 trillion per day in April 2013, the bank found. In addition, foreign currency trading was increasingly concentrated in the financial hubs of Britain, the United States, Singapore and Japan, which handled 71 percent of world transactions.

Brazil's finance minister first spoke of a currency war in 2011. Now the battle lines are hardening as Japan opens a new round in the race to see which country can weaken its currency fastest. (07.02.2013)

China's efforts to turn promote the yuan as an international currency have been boosted as direct trading with Japan's yen has begun. The move ditches the US dollar as an intermediary currency. (01.06.2012)

German officials and representatives of the Jewish community in Germany are gathering to remember and pay respects to the millions of victims of National Socialism.