Euro 2020: Germany need to get 'into competitive mode'

Joachim Löw gave a lengthy speech to his Germany team a day before their game against Portugal at Euro 2020. Germany don’t need to win to advance, but another defeat would put this side in a corner. 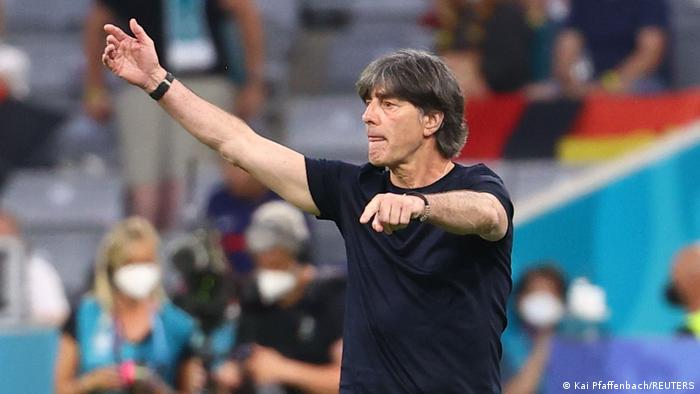 Joachim Löw has been under pressure for a while

It's normal for head coaches to talk to the team before the start of a training session. Joachim Löw has done that before every session at Germany's Euro 2020 base camp, but ahead of the final session before the game against Portugal, Löw spoke for a long time. It was clear he had a lot to say and once he was finished there was a fist pump to accompany his words.

"He told us that we had to start getting into that competitive mode," Joshua Kimmich told MagentaTV later.

At the press conference ahead of the game, Kimmich went further. "Everyone knows what is at stake tomorrow. It's nice nice when the coach is also really up for it, but the energy has to come from the group."

Externally, much of what Löw has said of late has been to increase the energy and optimism around a team whose form is still wildly inconsistent. Now, at the absolute latest, it is clear that as improved as this team's unity is compared to the last tournament more is needed. This group, for all of its individual quality, must put together a complete performance if it is to still be involved in the latter stages.

"It's not about the group not knowing each other, it's about orientation, bravery and willingness to take risks," Löw said. "We missed a lot of moments to do it well [against France] and I think we will do it better tomorrow.

Tactically, we need to offer something different, more offensive power. We need to be more direct, more dynamic."

Much of that will depend on the players, but also on their head coach. Given the 61-year-old has stressed on a number of occasions how important it is for Germany to be flexible, there is a chance Germany change their system.

With one of Löw's preferred right back options Lukas Klostermann effectively out for the tournament with a muscle injury, Jonas Hofmann still training individually and Leon Goretzka likely only ready for some minutes off the bench, Löw's desire to be both flexible and competitive is being tested though.

Words to make all the difference?

The same is true of Germany's players. The country has always been one of the leading football nations, but the current team is not one of the best in the world. For Joshua Kimmich and Kai Havertz, two players who have won it all at club level, that must be hard. With the previous generation having won the World Cup and reestablished German football in the modern era, this current group must also carry the weight of the past.

Löw knows that because he was there when Germany were on top of the football world. He helped them get there. Now he is trying to get them back, however he can.

Ahead of the final training session in Herzogenaurach, Löw stared out across the training pitch, deep in thought. He spoke individually to Antonio Rüdiger and Matthias Ginter before delivering his rousing and lengthy team talk. Not even the distant sound of party music from a Germany fan bus distracted him or the group. Both they and Löw know with just two group games left, time is running out.

"The pressure hasn't changed," Löw said. "As Germany you always have high expectations going into a tournament... The pressure is something every player and coach knows. It won't overwhelm us."

Given the tournament format, Germany do not have to beat Portugal to advance but it does feel like a game they need to win for themselves. Two straight defeats, even against the world and European champions, might not overwhelm this team but it might put it in a place beyond lengthy team talks and closer to a repeat of the disaster in Russia.