Euro 2016 final: Midfield battle between Sanches and Pogba could be crucial

While the focus may be on Cristiano Ronaldo and Antoine Griezmann, two of football’s brightest young talents - new Bayern Munich man Renato Sanches and Paul Pogba - will clash in a crucial midfield showdown on Sunday. 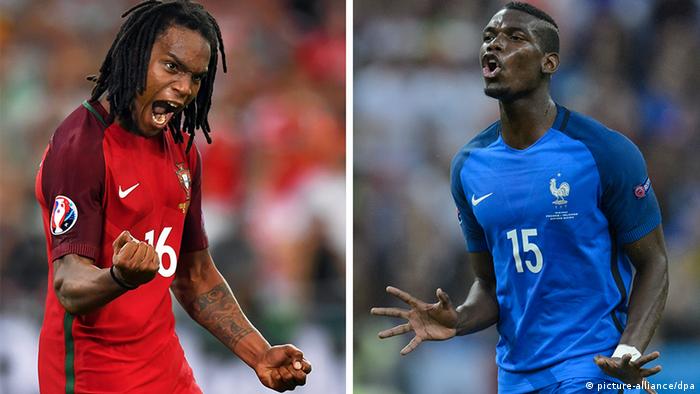 Sanches, 18, signed for the German champions before the tournament in a big money deal that caught many by surprise. But his displays in his first major tournament have made the reported initial 35 million euro fee look something of a bargain for the Bavarians.

The gifted teenager started the tournament on Portugal’s bench but a man-of-the match display after being introduced in the second half of normal time against Croatia in the round of 16 saw Sanches force his way in to the starting lineup for his country’s subsequent knockout games. And he didn’t disappoint, turning in consistent, composed and hard-running performances.

When Bayern signed Sanches in June, CEO Karl-Heinz Rummenigge described him as a "dynamic, combative and technically gifted midfielder" and he’s proved to be exactly that, with an excellent strike against Poland in the last eight underlining Rummenigge’s last adjective.

Juventus’ Pogba, who has been strongly linked with a big money move to former club Manchester United this week, has also spent time on the bench during Euro 2016 before emerging as a key man in his side’s charge to the final.

After he was one of several French players to underperform in the tournament opener against Romania, Pogba was dropped to the bench for France’s second fixture against Albania.

Like his Portuguese counterpart he responded postively. Also like his Portugues counterpart, Pogba is a powerful runner both with and without the ball and the in-demand star is as good in the tackle as he is at making driving runs from midfield. His all-round skills also mean he’s able to play a variety of midfield roles with distinction. While his qualities are obvious, the 23-year-old can suffer from inconsistency – at times veering from the sublime to the ridiculous within seconds– but at his best is an unstoppable force.

After he returned the side against Switzerland, Pogba has found a higher level of consistency and the spontaneous and sublime piece of skill that left Benedikt Höwedes chasing shadows played a major part in France doubling their lead in Thursday's semifinal.

There’s little doubt Ronaldo and Griezmann will have their say in Sunday’s final but the battle for midfield dominance often defines big games. In simple terms, the more the ball can be got to the attacking talent, the better chance of a win. Both Sanches and Pogba are more than capable of not only winning possession but using it decisively themselves.

Even Portugal’s captain, a man not renowned for his praise of others, had some positive words to say about his young teammate's value to the side earlier this week.

"This is a marathon, not a sprint. It has been shown not only by me but also by Renato, by Nani, by other players who have scored goals such as (Ricardo Quaresma) that national team is about everyone and not just about me," Ronaldo said.

France manager Didier Deschamp was even more glowing about his young charge earlier in the tournament, describing Pogba as the “heart and soul” of his side.

"Paul was the life-force of the first half, the heart and soul," he said after the Switzerland match in the group stages. "He didn't get forward as much in the second half but he has huge potential and I have a lot of confidence in him."

Whatever the result, this midfield duel is sure to be fascinating and wherever Pogba ends up, it’s one that seems certain to become one that has an enormous impact on European football.