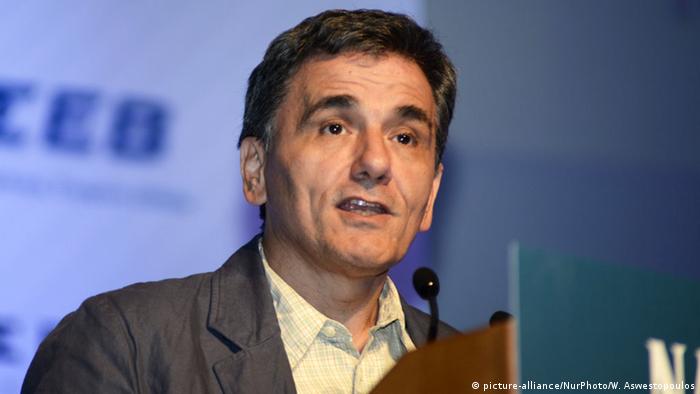 Tsakalotos had been working as deputy foreign minister and - since late April - coordinator of the negotiating team between Greece and its international creditors, a role he took on after then-finance minister Yanis Varoufakis took a step back from actively leading the negotiations as a result of pressure from creditors.

Tsakalotos, who is reputed to have an amiable, low-key style, seems to have proved more adept than Varoufakis at the diplomatic subtleties involved when a bankrupt state must negotiate with a large group of creditors. This is likely the consequence of Tsakalotos' upbringing, as he was raised and educated in some of the very best English schools and colleges.

Tsakalotos is a scion of an influential Greek family which has traditionally been closer to the right wing of the political spectrum. His father, Stefanos Tsakalotos, was a wealthy civil engineer. The family moved to the UK when Euclid was five years old.

Thanks to bequests from the estate of his father, Tsakalotos maintains two homes in Kifisia, along with an office in Athens and a holiday home in Preveza. He has been rumored to own a portfolio of stocks and bonds worth around a million euros. This wealth has made him a target of criticism among some Greeks, who call him an "aristeros aristokratis" - an "aristocrat of the Left," or a "champagne socialist" as it's known in the English-speaking world.

He was educated at St. Paul's, an elite private school in London - the same school attended by UK Chancellor George Osborne.

After St. Paul's, Euclid studied philosophy and economics (PPE) at the University of Oxford. PPE is the degree course traditionally taken in the UK by many a politically ambitious youngster from a well-to-do family. UK Prime Minister David Cameron and Chancellor George Osborne, among many other British politicians, are both graduates of Oxford's PPE program.

Tsakalotos has authored six books and many academic articles on economic policy, all of them written in English. He is married to Heather Gibson, a Scottish economist currently serving as a director-advisor to the Bank of Greece. Gibson has often been a partner of her husband in research and writing projects.

It's no surprise, then, that Euclid Tsakalotos speaks a polished upper class home counties English. His Greek, while fluent, is inflected by an unmistakable British accent.

Unlike Varoufakis, who joined Syriza only last year, Tsakalotos has been involved in the leftist coalition from the beginning. In a natural segue from his membership of the student wing of the Communist Party of Greece at Oxford, in the early 1990s he joined Synaspismos, which eventually became the largest party in Syriza - which is a coalition of leftist parties.

Tsakalotos is a member of Syriza's Central Committee. He was elected a member of the Greek parliament for Syriza in an Athens district in the May 2012 national election, and re-elected in June 2012 and January 2015. He has long been seen as a, or perhaps the, key figure on Syriza's economic policy team.

Like Varoufakis before him, Tsakalotos wants Greece to stay a member of the eurozone. He, too, is against continuing or deepening the austerity measures that Syriza says will only intensify the country's economic deflation and depression.

He sees Syriza as speaking not just for Greeks, but also for the poorer classes in Europe as a whole who have been, in the narrative of the European Left, the losers in the neoliberal market economy, with its pattern of increasingly concentrated wealth and power.

At Oxford, he got involved in the European Communist movement and has since been a long-term contributor to the anti-globalization movement. He has said that he believes in participatory democracy, of which the recent Greek referendum might be considered an example.

So the difference between the new finance minister and the previous one may be more a matter of communications style than of policy substance.