World leaders on Sunday called for a durable peace between Israelis and Palestinians and pledged aid and technical support to shore up a fragile ceasefire. Israel meanwhile hinted it was ready for a swift withdrawal. 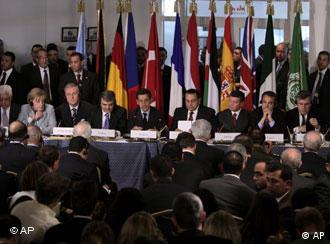 Summit participants expressed their hopes for a quick Israeli-Palestinian peace

The summit leaders stressed the importance of lifting the blockade of Gaza so that humanitarian aid can enter, ending weapons smuggling, and of creating a unified Palestinian state for the sake of transforming Sunday morning's ceasefire into a lasting peace.

"We are witnessing today the beginning of the end of this crisis," Egyptian President Hosni Mubarak, who hosted the summit alongside French President Nicolas Sarkozy, told reporters on Sunday.

"We look forward to the end of this sad page from our history," the Egyptian president said. "A lasting and a just peace is the only way to achieve the security of the people of this region, and a

Palestinian state is the only way to achieve this peace."

"This is the beginning of our journey to establish two states: an Israeli state, and a Palestinian state," Sarkozy said.

Sarkozy further called for the border crossings into Gaza to be opened immediately so that urgent humanitarian aid could reach civilians affected by the conflict, and pledged France's technical assistance to Egypt in stopping weapons smuggling from Egypt into Gaza.

The French president said that France supports Israel's struggle to defend its rights and the security of its citizens, but stressed that Israel "must promise to leave Gaza if the rocket-fire stops." 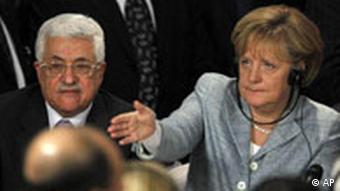 German Chancellor Angela Merkel also offered to provide technical and training assistance to help Egypt stop weapons smuggling from the Sinai peninsula into Gaza, and stressed that "the two-state solution is the sole possibility" for achieving peaceful co-existence between Israelis and Palestinians.

UN Secretary General Ban Ki-moon called on Hamas to stop firing rockets into Israel and called on Israel to "exercise maximum restraint" in the coming days and weeks.

He hailed the ceasefire, but warned that "with the division of the Palestinian people, this may only be a stop-gap, there is no guarantee that this will not happen again."

"On the basis of a unified Palestinian people, we may be able to see a peace" Ban said.

Ban: I have to take care of Gazans

He said that as secretary-general of the United Nations he had "a sworn responsibility to take care of the humanitarian suffering of the people of Gaza," and that within 10 days a UN team would present a preliminary assessment of the humanitarian needs in the territory, to be followed by a fuller report two weeks later.

British Prime Minister Gordon Brown told reporters, "I can see a clear path to peace," but said in order for the "fragile ceasefire" between Israel and Hamas to hold, it must be followed by troop

withdrawal, the opening of border crossings, an end to rocket attacks, and by "a secure Israel and a secure Palestine."

Brown pledged UK aid in removing unexploded ordnance, in reconstructing buildings destroyed in the fighting, and in counselling children traumatized by the fighting.

Czech Prime Minister and current representative of the rotating European Presidency Mirek Topolanek thanked the International Committee of the Red Cross/Red Crescent and other humanitarian workers who "worked to alleviate the suffering of Gazans," and extended his country's "condolences to all those Palestinians who lost family members in the fighting."

Palestinian President Mahmoud Abbas described the crisis in Gaza as "a humanitarian catastrophe," and said that "what you saw in the media is much less than what happened in Gaza."

He said meetings to discuss the reconstruction of Gaza and the reconciliation of Hamas and Fatah were important, but that "what was of the utmost urgency was to stop the war."

Olmert: No intention to stay 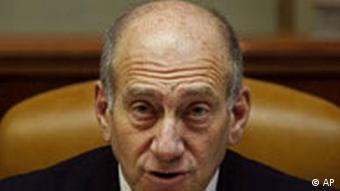 Representatives of Israel and Hamas did not attend the summit, but the European leaders headed to Jerusalem following their meeting in Egypt.

Israeli Premier Ehud Olmert told them that his country had no intention of keeping its troops in the Gaza Strip and will leave the salient once it is satisfied that the ceasefire is holding.

"We are keen on getting out the Gaza Strip with the greatest possible speed, once we can guarantee the ceasefire exists and is stable and there is no danger to the security of southern Israel," he said.

Olmert however told the European leaders that in order for the ceasefire to take hold, Hamas had to be prevented "from rebuilding its military capabilities through the massive smuggling into the Gaza Strip of weapons from Iran and Syria."

He thanked the leaders present in Jerusalem for a letter committing to help stopping arms smuggling, but added that "now we have, together with the United States and Egypt, to translate the commitment into action."

The Israeli leader said Israel was prepared to work with the Europeans "to create better conditions for prosperity for the Palestinians in the Gaza Strip."

Palestinian medical officials estimate that at least 1,300 people died in the Israeli operation. It is unclear how many of the Palestinian fatalities were militants and how many were civilians.

Olmert on Sunday night said that he wanted to express Israel's pain for the casualties among Gazans who weren't involved in terrorism.

"I express, in the name of the state of Israel and the government of Israel and its people, my deep regret for these casualties."

The EU on Sunday welcomed the unilateral ceasefire announced by Israel as Hamas leaders agreed to halt fighting for one week. Meanwhile, world leaders met in Egypt for talks on the crisis. (18.01.2009)

Israel's Olmert Calls for Ceasefire Ahead of International Summit

Israeli Prime Minister Ehud Olmert announced a unilateral ceasefire on Saturday. But the Palestinian militant group Hamas said it would continue fighting until Israeli troops withdrawal from the Gaza Strip. (17.01.2009)

Thousands rallied around Europe on Saturday to protest against Israel's assault in the Gaza Strip. Protesters highlighted the numbers of Palestinian women and children killed in the war entering its fourth week. (17.01.2009)

DW-RADIO on the Gaza Ceasefires