EU-US trade deal is ′unique opportunity′ | World| Breaking news and perspectives from around the globe | DW | 26.02.2013

US-EU plans to join forces via a free-trade agreement are taking on shape. During his Berlin visit, US Secretary of State John Kerry described the planned pact as a priority for President Barack Obama's second term. 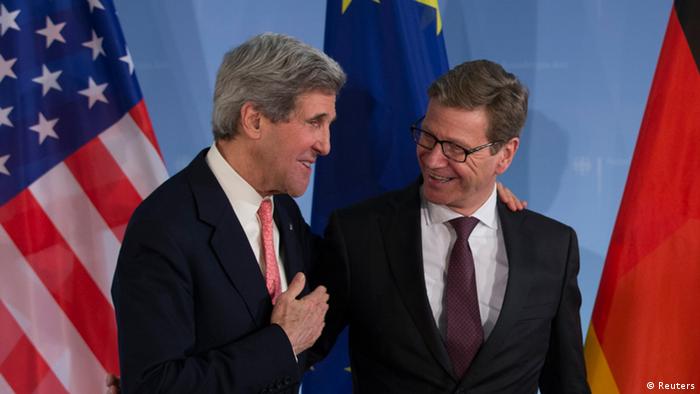 Following on from Obama's State of the Union address, John Kerry has marked out the free-trade agreement as a key element in cementing transatlantic ties. "We think this is something that can lift the economy of Europe, strengthen our economy, create jobs for Americans, for Germans, for all Europeans and create one of the largest allied markets in the world," Kerry said on Tuesday in Berlin after talks with his German counterpart, Guido Westerwelle.

Economists, politicians and entrepreneurs are practically chomping at the bit. The planned all-encompassing free-trade agreement between the US and EU would spur growth on both sides of the Atlantic. It would also ensure that the global economic rules of the future are put in place by western countries - and not China.

Economically, a broad free-trade agreement would fundamentally redraw the map of worldwide trade. Goods and services traded between the EU and US constitute the largest bilateral economic partnership in the world. Daily, they amount to more than 1.8 billion euros ($2.4 million). The combined GDPs of the US and EU account for approximately half of worldwide economic output and one-third of the global flow of goods. According to EU estimates, a comprehensive free-trade agreement between the EU and US would raise the EU's GDP by one-half percent, or 66 billion euros per year. A similar increase is expected for the US.

Within Europe there is broad political support for a transatlantic free-trade agreement. German Chancellor Angela Merkel and British Prime Minister David Cameron have already spoken out in favor of the project. After a task force reported on the opportunities and implications of a Euro-American trade agreement last summer, not only the President of the EU Commission, Manuel Barroso, gave signals of approval, but also US President Barack Obama.

Yet even if the final report of the transatlantic task force recommends a commencement of negotiations when it is released in the next few days, it is still unclear whether a transatlantic free-trade zone will ever become reality.

"A far-reaching free-trade agreement would go further than all other trade agreements in the past combined," said EU Commissioner for Trade Karel de Gucht in December. "But can we reach that goal? It won't be easy, but the prospects look good." Previous deals between the EU and Singapore, Canada, South Korea or Mexico would also pale in comparison to the planned agreement with the United States.

Daniel Gros, the director of the Brussels Centre for European Policy Studies, advocates just such a trade deal unequivocally. But does he see it happening? "I simply don't believe that the political will is strong enough to overcome the various obstacles," he told DW.

"The largest problem is the independence of the [national] regulatory authorities," Gros said. He considers the US Food and Drug Administration a prime example. "Can American authorities accept European certifications without question and vice versa?"

Similar questions arise with regard to the approval and regulation of numerous goods and services. Thus the EU requires, for example, that all genetically modified foods are labeled when the US has no such restriction. Other complex and previously differentiated services such as insurance and financial products are also meant to be covered under the trade deal.

"I think it's unrealistic to expect a free trade agreement to harmonize all of those regulatory matters," said Charles Ries, vice president of the RAND Corporation in Washington DC, in an interview with DW. Ries, who participated in the North American Free Trade Agreement between the US, Canada and Mexico, favors small solutions.

"I would envisage a situation where you had a free-trade agreement that eliminated tariffs and quotas between the United States and Europe," he added.

But the EU and US view the issue in all-or-nothing terms. "Customs barriers aren't really the problem in transatlantic trade," said John Clancy, spokesperson for the European Commissioner for Trade. "The biggest obstacles are the different regulatory standards, which is why we're not just looking to get rid of customs tariffs, but are trying first and foremost to harmonize all these rules."

Experts are skeptical as to whether such an agreement can ever be reached. They point to similar visions of free, transatlantic trade from the past that fizzled out in the political chambers of Washington and Brussels.

After the multi-year and ultimately fruitless worldwide trade deal called the Doha Development Agenda failed in 2008, Washington is also tired of endless discussion. In order to gauge the seriousness of Europeans on the matter, the Obama administration has recently been anxious for a clear signal from Brussels.

Yet even if the EU and US begin negotiations in the coming months, success is anything but assured. Negotiators from both the US government and the EU Commission will not be free to negotiate as they please. Without the ultimate approval of US Congress and the EU Parliament, there will be no agreement. Other countries, such as Turkey, which has a customs agreement with the EU, or Canada and Mexico, which are linked to US trade through NAFTA, will at the very least have to play an informal role in future negotiations.

That's why many experts have joined American demands for a quick tempo to negotiations and a clear timeframe for achieving them. Within one year of the beginning of talks, experts should be in possession of a fundamental agreement, they argue. After two to three years, a contract should then be agreed upon.

Regardless, warns Daniel Gros, politicians are taking on a risk that's difficult to calculate in their attempt to forge a transatlantic free-trade agreement.

"When you start with such a big project, but then can't finish it, then you could possibly end up worse off than if you'd never tried it at all," he said.

Leaders from the EU and Latin America have ended a two-day summit with pledges of boosting bilateral trade. While few concrete details were released, the two economic blocs expressed a clear wish for stronger ties. (28.01.2013)