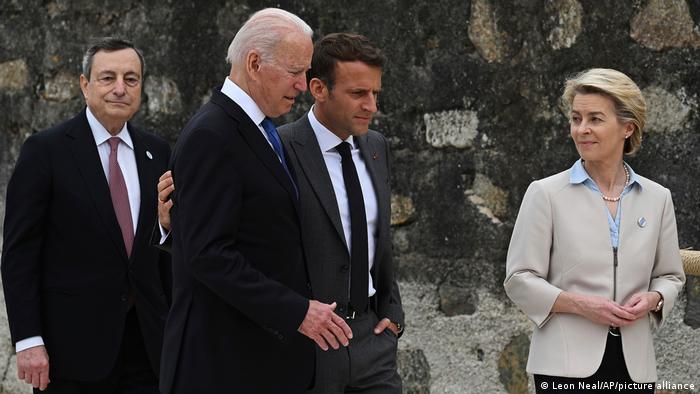 US President Joe Biden is in Europe as he looks to reset ties with traditional American allies. Trans-Atlantic relations had become increasingly tense during his predecessor's term, thanks in part to tariffs that Donald Trump slapped on billions worth of European goods.

Biden and European Union leaders will on Tuesday commit to ending trade disputes related to aluminum, steel and aircraft, according to a draft communique ahead of the US-EU summit.

A week of diplomacy

The draft spells out that the two sides will commit to end the nearly two-decade old Boeing-Airbus dispute before July 11 and lift punitive tariffs related to the steel and aluminum trade dispute by December 1.

The talks to ease the tariffs take place as the allies are witnessing a steep rise in prices, propped up by supply chain issues such as a shortage of shipping containers, high commodity prices and pent-up consumer demand that pandemic-hit businesses are struggling to meet.

Steel and aluminum: A security threat?

In 2018, Trump dismayed his European allies by  imposing 25% tariffs on imports of European steel and 10% on aluminum, saying the European competition was endangering national security.

The Trump administration used Section 232 of the Trade Expansion Act of 1962 — a Cold War relic seldom used before it became the president's weapon of choice — that allowed the US to impose tariffs or other trade restrictions on trading partners on national security grounds. Trump said the EU's "unfair" trade policies were jeopardizing the existence of critical US industries, and threatened duties on the European auto industry on similar grounds.

The response from the EU, which described the move as "protectionism, pure and simple," was swift and severe. It retaliated by imposing tariffs on €2.8 billion ($3.39 billion) worth of US goods like jeans, bourbon whiskey, peanut butter, orange juice and motorcycles.

Trump extended the tariffs on an annual €6.4 billion of steel and aluminum imports from the EU last year, prompting the bloc to threaten fresh duties on US lighters and plastic fittings for furniture, among other things.

In May, just a month ahead of Biden's first visit to Brussels as the head of state, the two sides agreed not to escalate the dispute. The EU suspended for six months its plans to double retaliatory tariffs on US goods starting in June to boost negotiations.

The conflict between the aviation giants — one of the longest-running at the World Trade Organization — was not of Trump's making but it did come to a head during his tenure, with goods worth billions from the EU and the US targeted with punitive tariffs.

In 2019, the WTO allowed the US to impose tariffs on up to $7.5 billion (€6.2 billion) worth of EU goods, the largest award in the trade body's history, after ruling that the EU had supported Airbus with subsidized loans. The world body also found that the loans, which were repayable on delivery, amounted to illegal assistance.

How Covid-19 has grounded airlines

Impact of COVID-19 on the aviation industry

A year later, the global trade body permitted the EU to slap tariffs on $4 billion worth of US goods in a counter case. The WTO ruled that Washington's favorable contract terms and tax breaks to Boeing had hurt Airbus sales.

In March, both sides agreed to temporarily suspend the tariffs

, which targeted aircraft, sweet biscuits, wines, ketchup and cheese, as they sought to settle the dispute.

The negotiations between the EU and the US come at a time when the COVID-19 pandemic has dealt a massive blow to the aviation sector, with much of international travel still suspended.

Digital services tax in the crosshairs

In 2019, the Trump administration threatened to impose tariffs on $1.3 billion worth of French goods, including handbags, cosmetics and soaps, in retaliation to the French government's decision to impose a 3% tax on revenue earned in the country by global tech companies such as Amazon, Google and Facebook.

Paris argued that the big tech firms were not paying their fair share of taxes by diverting some of their profits to low-tax jurisdictions. Washington said the tax was discriminatory and unfairly targeted US firms.

The tariffs were suspended earlier this year as the US investigated similar taxes adopted by a handful of other countries, including the United Kingdom, Spain and Italy.

Earlier this month, the Biden administration announced retaliatory tariffs on goods from Spain, Italy and Austria over their digital services taxes, but immediately suspended the duties to allow time for OECD-led negotiations aimed at overhauling the international tax system.

Just before Biden embarked on his European tour, the G7 group of wealthy countries reached an agreement to ensure big corporations pay more taxes in the countries where they do business.

Tariffs: EU caught between desire for retaliation and calm

The EU doesn't want to just put up with Donald Trump's higher import tariffs and is mulling retaliatory measures. But German firms, in particular, fear that no one would profit from an escalation of the situation.