The European Union decided to postpone its final decision on the CETA free trade agreement with Canada. A number of member states, chiefly Belgium and Romania, had earlier expressed concerns about CETA. 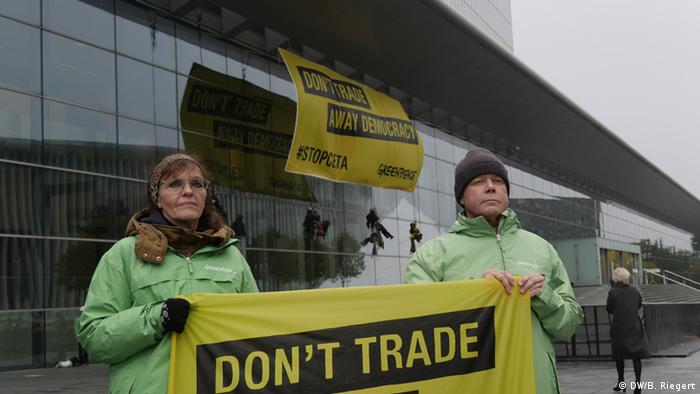 EU trade ministers in Luxembourg failed to agree on the details on the free trade deal with Canada on Tuesday. The decision has been postponed until next week.

While a number of countries had voiced their concern with regard to the controversial agreement, Slovakian trade minister Peter Ziga said that in the end it was Belgium reservations which put a halt to the process. Slovakia currently chairs the EU.

Ziga added that he remained confident the deal with Canada could still be signed by October 27 during the EU-Canada summit - as was originally planned:

"I can't really imagine that Belgium will be the final stumbling stone," Ziga said, referring to the country's close linguistic ties with Canada.

Observers expect, however, for details to be hashed out during the upcoming EU summit later this week. Leaders from across the bloc are due to meet in Brussels on October 20 and 21 for the annual summit, which will focus on trade policy.

EU Trade Commissioner Cecilia Malmström also said that she was hopeful that CETA could be signed in time.

All eyes on Belgium

Belgium's regional parliament of Wallonia had earlier halted its executive from granting the federal government the go-ahead to support the deal. Belgium cannot sign up to CETA without backing from all five sub-federal governments representing its regions. Belgian foreign minister Didier Reynders stressed that his government would continue to work on getting support from all regional governments.

Bulgaria and Romania also voiced their opposition earlier, saying that they wanted visa-free travel to Canada to be one of the conditions for them to agree on the deal.

CETA is a proposed free-trade agreement designed to eliminate 98 percent of the tariffs between Canada and the EU. Those opposing it claim it would weaken European consumer rights, including food safety regulations. CETA supporters say it will increase bilateral trade by 20 percent and boost the EU economy by 12 billion euros ($13.4 billion) per year.

Germany's Constitutional Court has given the go-ahead for the government to approve a free trade agreement between the EU and Canada. Opponents claimed the CETA agreement would undermine democratic rights. (13.10.2016)