EU Takes Charge in Cleaning Oil Spill on Lebanese Coast | Europe | News and current affairs from around the continent | DW | 19.08.2006

The European Union has agreed to coordinate efforts to contain a massive oil spill off the coast of Lebanon in an effort to prevent an environmental disaster in the Mediterranean Ocean. 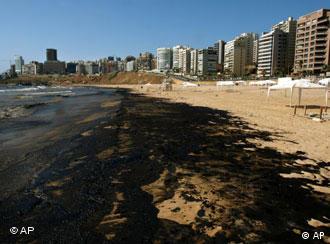 An Israeli bomb attack four weeks ago on the Lebanese Jiyeh electric plant has polluted some 140 kilometers (87 miles) of the Lebanese coast, spread north into Syrian waters and has the potential to reach the coasts of Cyprus and Turkey, according to the United Nations Environment Program.

If all the heavy fuel from the damaged facility's storage tanks located some 50 km south of Beirut were to seep into the sea, officials said, the environmental fallout could rival the Exxon Valdez spill when 37,000 tons of oil devastated Alaska's Prince William Sound.

At a meeting Thursday with EU and the International Maritime Organization, the United Nations Environment Program (UNEP) requested 50 million euros ($64 million) to contain the oil spill, adding that violence in the Middle East had kept them from being able to make an accurate assessment of cleanup costs. 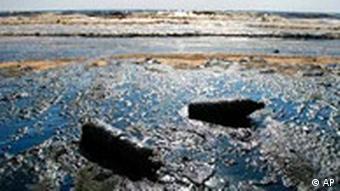 "Now that the bombs have stopped and the guns have silenced, we have a chance to rapidly assess the true magnitude of the problem and finally mobilize the support for an oil cleanup and restoration of the coastline," said Achim Steiner, the UNEP's executive director.

Israel agreed to allow international experts and cleanup crews access from the shore, although Lebanon's environment minister said it was still not allowing helicopters or other aircraft to assess the damage.

"Israel has allowed humanitarian corridors since Monday," Lebanon's Environment Minister Yacoub Sarraf told a news conference after the meeting. "The embargo has not totally been lifted, airspace and waters remain sealed, but they have free movement on the shore for the international assistance to go in."

Threat to economy and wildlife 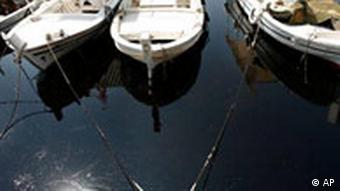 The UNEP said the spill will have humanitarian and economic implications, by robbing fishermen of their livelihoods and discouraging tourism. The oil also continues to threaten already decimated animal populations including green turtles and tuna.

Limited cleanup work has already begun, according to Barbara Helfferich, a spokeswoman for the European Commission.

"The Norwegians have spent equipment to fight the oil spill at sea," she said. "The pumping and cleaning has begun."

Officials said they believed about 80 percent of the oil is on the coastline, 20 percent has evaporated and less than one percent is at sea.

Though an exact timetable cannot be set due to the precarious ceasefire in the region, a UN action plan envisions about 300 people working at 30 cleaning sites that would deal with the waste by either burning it in refineries or possibly using some in public works such as road construction.

Chancellor Angela Merkel and the leaders of the parties in her ruling coalition government said on Wednesday they had agreed in principle on contributing to a UN force in Lebanon. (Aug. 16, 2006)