EU, Russia to Resume Partnership Talks Next Month: France | Europe | News and current affairs from around the continent | DW | 21.09.2008

The EU will resume partnership talks with Russia as early as October if Moscow withdraws its troops from the Georgian mainland completely, French Prime Minister Francois Fillon after meeting with Russia's Vladimir Putin.

Putin had promised that the remaining Russian troops would be withdrawn from Georgia, Fillon was quoted as saying by the Interfax news agency after the talks in the Black Sea resort Sochi, which also saw France and Russia agree on future cooperation in the area of space aviation.

After Moscow's full withdrawal, there would be no more reason to halt the talks which the EU had put on hold after the war between Russia and Georgia over the separatist region of South Ossetia, said Fillon. France currently holds the rotating EU council presidency. 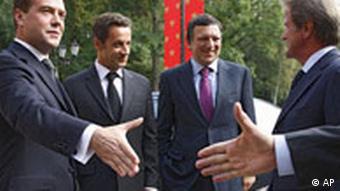 Let's shake on it: Russia and the EU edge closer again

Under the peace plan agreed by Russian President Dmitry Medvedev and his French counterpart Nicholas Sarkozy, Moscow is to withdraw its troops by October 10 from the Georgian mainland bordering the separatist regions South Ossetia and Abkhazia.

Instead, 200 EU observers are planned to maintain security in Georgia's mainland.

Putin said the deployment of about 3,800 troops each in Abkhazia and South Ossetia was based on a friendship treaty with Russia. The Russian soldiers in these regions -- recognized by Moscow as independent countries after the war -- were to prevent the attack of Georgian troops.

Speaking on the other issues, Putin said Russia and France had agreed to cooperate more closely in the field of space technology in future.

The two countries could join in developing a new spaceship, Putin said, adding that about 250 Russian experts were already working at the space station in Kourou, Itar-Tass reported.

The two countries also agreed on increased programs for youth exchanges as well as a "strategic partnership" in education and research.

Russia is set to sell 10 Soyuz carrier rockets to the French Arianespace company for up to $400 million under a deal signed in Sochi with the Roskosmos space aviation authority.

The first Soyuz rocket was due to start by the end of 2009, Arianespace General Director Jean-Yves Le Gall said. 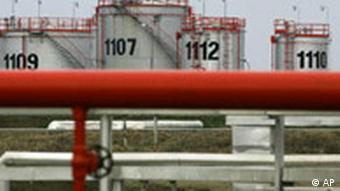 The EU and Russia agreed on energy and climate issues

On the sidelines of the Sochi talks, political and business delegates from the two countries also inked an agreement on cooperation in the fields of environmental and climate protection as well as energy efficiency.

The two-day meeting was the 13th convention of the Franco-Russian government commission. France is planning a so- called "Russia Year" in 2010, while Russia is preparing a "France Year" also for 2010.

French President Nicolas Sarkozy heads an EU delegation to Moscow Monday to raise pressure on Russia to comply with a month-old peace deal and withdraw troops from Georgia. (08.09.2008)

At an emergency summit, the EU condemned Russia's recognition of South Ossetia and Abkhazia and voted to postpone the next round of strategic partnership talks with Russia pending the withdrawal of troops. (01.09.2008)