The latest talks between Russia and the European Union have failed to produce progress towards resolving a number of bones of contention. However, there was little disappointment, as no progress had been expected. 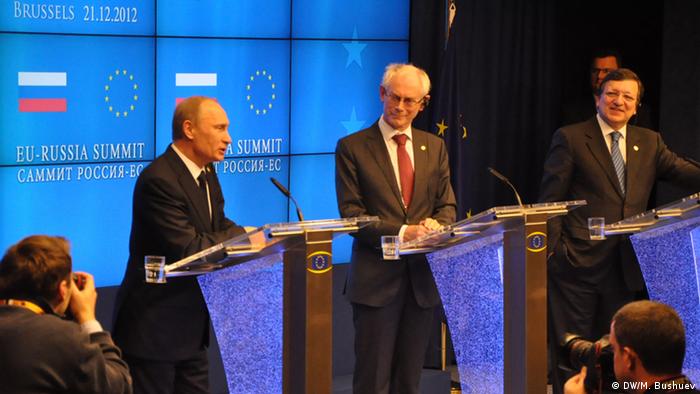 The European Union and Russia, represented by President Vladimir Putin, failed to bridge their differences on Syria or visa requirements, but a press conference at the close of Friday's talks showed that energy policy remained by far the most divisive issue.

European Commission President Jose Manuel Barroso used the opportunity to outline why in the EU's view, its policy respected "all international agreements and also the principles and rules of law."

"Your [Russia's] companies are most welcome in the European Union market. But they have to respect fully our rules," Barroso added.

The Commission's president was referring to an aspect of EU energy policy which bans energy suppliers from dominating distribution networks within the block. This could eventually force Russian energy giant Gazprom, which owns 51 percent of the Nord Stream pipeline, to sell off part of its stake. Russia argues that the EU regulation violates World Trade Organization rules.

Putin responded to Barroso's explanation by saying he was only "so emotional, because he knows he is wrong."

Russia is the EU's single most important energy supplier, and in recent years disputes between Moscow and neighboring transit companies have led to short disruptions in the gas supply to the 27-member bloc. The EU is also the biggest market for Russia's energy exports, accounting for almost 80 percent of its sales in 2011.

Not surprisingly, Putin also raised the thorny issue of visa requirements for Russian citizens visiting the EU. The Russian president bemoaned the fact that citizens of countries located much farther away, like Venezuela, Honduras or Mexico could enter the EU without a visa.

"You name it, everyone is on the list. Forty states in total, that are located 1,000 miles away from you." Putin said. "The absence of visa-free travel deters the development of our economic relations."

The EU leaders responded by offering a mechanism to reduce costs and bureaucratic hurdles for Russians applying for visas.

Van Rompuy and Barroso also used the meeting to raise the issue of human rights in Russia, citing the case of Sergei Magnitsky, a human rights lawyer who died in a Moscow jail in 2009. He had been investigating allegations of corruption in the Russian interior ministry when he was arrested by police.

Putin responded by complaining of "outrageous" human rights violations in the EU, saying that many Russian speakers were being denied citizenship in the bloc's Baltic states.

The two sides also touched on the situation in the Middle East and the Syrian conflict. Putin noted that: “Everyone is interested in stopping the bloodshed and violence.”