The European Union has opened an office in Myanmar in response to the country's political reforms. The bloc's top diplomat also urged the government to press on with the reform process. 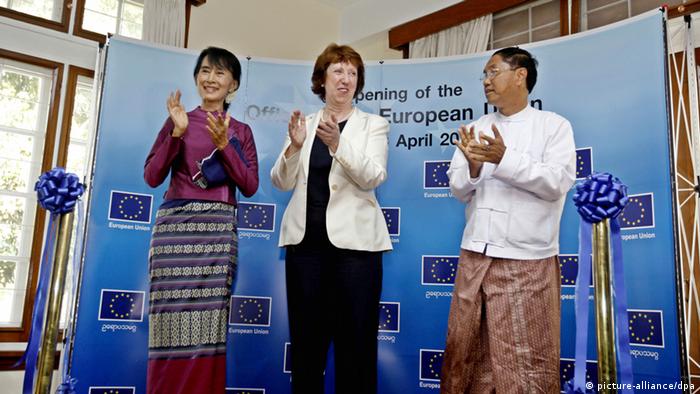 The European Union's foreign policy coordinator has opened an EU office in Yangon, the latest sign of a thaw in relations since Myanmar began introducing political reforms a year ago.

Earlier, Ashton had also called on Myanmar's government to take steps to ensure that the reforms it has introduced so far become "irreversible."

Suu Kyi welcomed the move saying that the new office would “enhance the relationship between the EU and Burma,” referring to the country by its previous name.

The EU had already responded to a series of reforms introduced in the country since President Thein Sein took office in March 2011 by suspending a wide range of economic, trade and individual sanctions for a period of one year. This has allowed the EU to commit to provide 150 million euros ($199 million) in aid over the next two years, most of which is to go to long-term rural development. An arms embargo remains in place.

Ashton is to travel to the country's capital, Naypyidaw for talks with President Thein Sein on Monday. She said she would use their talks to “welcome the way in which he is moving forward” and “urge him to do more.”

While the new government has earned praise from the West for its reforms, it is facing political pressure from the opposition.

Suu Kyi and the 42 other members of her National League for Democracy, who won seats parliamentary by-elections on April 1, boycotted the swearing-in ceremony due to their objection to the wording of the oath of office. In its current form, the oath requires parliamentarians to "safeguard" Myanmar's pro-military constitution.

Suu Kyi, though, has played down the dispute, referring to it as a "technical" issue.