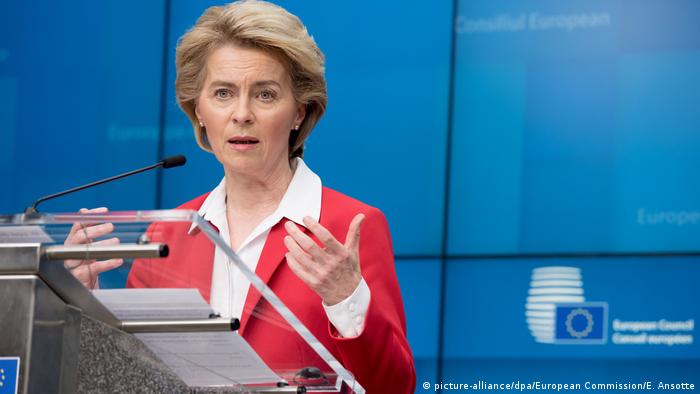 European Commission President Ursula von der Leyen said the Support to Mitigate Unemployment Risks in an Emergency (SURE) plan would have a €100 billion ($109 billion) budget, on the proviso that states stump up a quarter of the cash.

"In this coronavirus crisis, only the strongest solutions will be enough," she told a news conference in Brussels. "We have to use every means available."

The German politician said every euro in the EU budget must be activated to help stem the economic shock created by the coronavirus pandemic.

All EU budget rules will be relaxed so that the money can reach those that need it as quickly as possible, von der Leyen said.

Read more: Coronabonds and the idea of EU financial unity

An internal paper shared before Thursday's announcement suggested that the plan would be supported by a system of guarantees by EU member states, allowing the €100 billion to be raised on the credit markets.

In addition to the huge pressure on health care systems from large numbers of seriously ill coronavirus patients, EU member states are also struggling with how to prevent mass unemployment and business bankruptcies as a result of the restrictions imposed to stem the pandemic.

Eurozone finance ministers will meet on Tuesday to agree on activating a €200 billion bailout fund to help ailing economies.