Some 200 European Union observers took up work in Georgia on Wednesday to monitor a ceasefire and oversee Russian troop withdrawal following the August war in the Caucasus state. 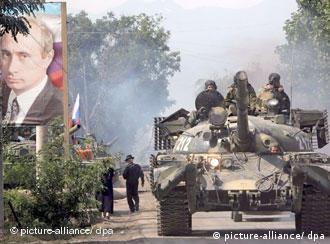 Russian troops are withdrawing, but not as far as the EU would like

The mission is intended to help ensure the implementation of the six-point plan, negotiated by EU President Nicolas Sarkozy with the Russian and Georgian governments in September. The most important point is the withdrawal of Russian troops from two "security zones" deep inside Georgian territory, which Russia occupied in August.

The EU had hoped to get Moscow's forces to withdraw from the breakaway regions of Abkhazia and South Ossetia as well, but Russian President Dmitry Medvedev categorically ruled that out.

European leaders were forced to accept less than they wanted.

"This is all really very incomplete, as I and everyone else know," French Foreign Minister Bernard Kouchner said in late September. "But in the first instance it was for us a matter of getting a date for a Russian withdrawal from the parts of Georgia that border with Abkhazia and South Ossetia." 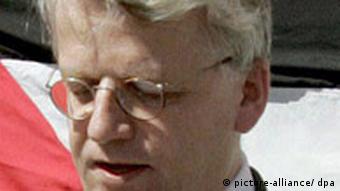 Haber will be overseeing the overseers

The EU observer mission consists of some 200 unarmed police officers and civilian experts. They will not be given military escort, although they will be transported in armored SUVs. The mission is made up of a large contingent of French gendarmes, as well as human rights and legal experts. Germany has sent 40 observers, most of them police officers.

The mission is directed by Germany's former ambassador to Lebanon, Hansjoerg Haber, who has been in Georgia since Sept. 20.

"This mission is purely civilian and that's our big challenge," Haber said. "It's operating in an area that's been marked by violence, looting and every kind of disturbance. I think the people are ready for someone who does not carry arms and isn't grim-looking, but who waves and smiles and is really just an observer."

Haber added that, thus far, his Russian counterparts have been cooperating.

"They seem business-like, and we've established contact with them," Haber said. "I'm sure we'll have an orderly handover with them." 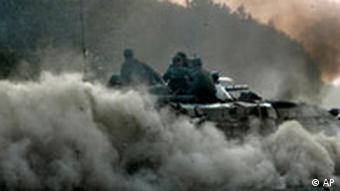 Russian troops have already moved out of towns like Gori

Despite earlier objections from the Russian military, EU monitors have entered the Russian-controlled "buffer zone" around South Ossetia.

Reuters news agency reported that an EU patrol was stopped at a Russian military checkpoint marking the edge of the zone, but was waved through shortly afterwards.

On a visit to Tbilisi on Tuesday, EU foreign policy chief Javier Solana said the bloc expects Russia to respect the peace plan and pull its troops by an Oct. 10 deadline.

"The objective of the mission is to allow Russian forces to withdraw," Solana said. "I am optimistic that all the parties will comply, as we have done, to the terms of the agreement," he said.

Delegations from Germany and Russia meet in St. Petersburg this week for the traditional gathering of minds from the the political and civil spheres of both nations. However, this year, things are different. (30.09.2008)

Germany to Send 40 Observers on EU Mission to Georgia

The German government on Wednesday approved plans to send up to 40 observers to a European monitoring mission in Georgia. (24.09.2008)

Russia will not accomplish its "war aim" of removing the government of Georgia, US Secretary of State Condoleezza Rice said Thursday. She said the US and Europe have to show Moscow it is internationally isolating itself. (18.09.2008)