EU ministers strike deal on principles of tighter budget rules | Europe| News and current affairs from around the continent | DW | 19.10.2010

European finance ministers in Luxembourg have agreed on the principles of tighter budget rules to avoid a repeat of the Greek debt crisis. Progress was made after Germany and France thrashed out a deal of their own. If spending is not kept in check, sanctions could follow

Finance ministers struck their deal to strengthen budget rules in an extensive meeting on Monday to deliver on promises that the Greek debt crisis would never happen again.

EU President Herman van Rompuy, who led the debate, hailed the results of eight hours of negotiation as "a great step forward in economic governance." 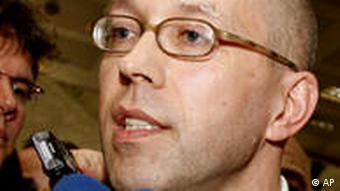 Asmussen said the Franco-German deal was necessary for wider progress

The agreement followed a deal between France and Germany, with Paris insisting that over-spenders would be penalized only after a majority of eurozone counties agreed that regulations had been breached.

Germany yielded ground on the imposition of automatic penalties after France agreed that changes to the EU's Lisbon Treaty - to give the regulations stronger legal status - should remain a possibility. A treaty change is a long-standing German demand.

"A Franco-German agreement is necessary to get the whole thing moving along," German Deputy Finance Minister Joerg Asmussen said on Monday evening.

Meanwhile, Chancellor Angela Merkel and French President Nicolas Sarkozy expressed unity on the matter at a separate meeting in the French resort of Deauville.

Sarkozy said that more effective measures were needed to deal with countries that breached the rules. "When a country has an excessive deficit and has not adopted appropriate measures after six months, there must be sanctions," he said, with Merkel adding that a stronger mechanism would be necessary. "For that, we need changes in the treaty," said Merkel.

No agreement on treaty change

However, Prime Minister of Luxembourg Jean-Claude Juncker, head of the Eurogroup of finance ministers for countries that use the euro as their common currency, said that no agreement on treaty change had been reached. 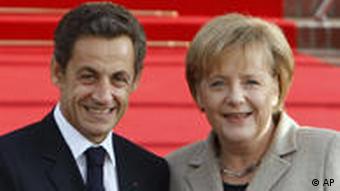 At a separate meeting, Sarkozy and Merkel both spoke of the need for a tougher system

He also added that it was "too early to judge" the effectiveness of the overhaul, commenting that details remained to be agreed upon.

Under the proposed regime, countries found to have broken the rules would face "quasi-automatic" sanctions – the nature of which has yet to be agreed upon. However, these sanctions could now be waived with the agreement of a qualified majority of EU states.

The regime would apply to eurozone members at first, and would eventually be extended to all EU states except Britain, which retains an opt-out clause.

The political accord is expected to be endorsed by EU leaders at a summit meeting in Brussels at the end of October.

The EU's Stability and Growth Pact states that member states must keep deficits below three per cent of gross domestic product (GDP) with public debt less than 60 per cent of GDP. However the rules have been broken regularly.

EU and Germany push for penalties for deficit offenders

European Union officials are launching an effort to impose sanctions on member states whose budget deficits are out of control, and Germany is one of the strongest - and harshest - supporters. (27.09.2010)

As member states continue spending beyond their means, the EU has agreed to set up a watchdog to monitor national budgets. The plan is to keep control of borrowing levels and prevent future debt crises. (07.09.2010)

Paris and Berlin have called on European Council President Herman van Rompuy to enforce more fiscal discipline and tougher sanctions for EU countries that fail to comply with the bloc's regulations. (21.07.2010)