EU Ministers Hold Delicate Talks on Relations with Russia | Europe | News and current affairs from around the continent | DW | 13.10.2008

European Union foreign ministers were due to discuss re-starting cooperation talks with Russia amid disagreement over whether Moscow had fully complied with a peace deal in Georgia. 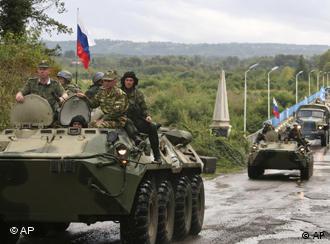 Ministers arriving at their meeting in Luxembourg Monday, Oct. 13, indicated that reaching consensus on the strategic Partnership and Cooperation Agreement (PCA) talks would be difficult.

"We have to take it fairly slowly," said Finnish Foreign Minister Alexander Stubb. "I do not expect a decision (on the PCA) to be taken today."

Stubb chairs the Organization for Security and Cooperation in Europe (OSCE), which has a military monitoring operation in Georgia.

Last Thursday, OSCE monitors said Moscow had pulled its forces out of the buffer zones adjacent to the separatist enclaves of South Ossetia and Abkhazia, one day ahead of the expiry of an Oct. 10 deadline brokered by the EU and agreed by Russia and Georgia.

But OSCE officials said Russian troops were still present in the Akhalgori area, prompting French Foreign Minister Bernard Kouchner to say during a visit to Georgia on Friday that "not everything has been achieved."

EU-Russia summit set for next month

And while countries like Finland would like to see the PCA negotiations resume "as soon as possible," Stubb said realism dictated that any decision would not likely be made much before an EU-Russia summit scheduled to take place on Nov. 10.

EU leaders agreed on Sept. 1 to freeze the PCA talks as a result of Russia's "disproportionate use of force" in Georgia.

The freeze was to last "until troops have withdrawn to the positions held prior to 7 August," the date Russia's war with Georgia began.

But while some member states argue that Russia has successfully complied with the conditions set out by the EU, others say talks cannot re-start while Russia continues to maintain a substantial military presence inside the two breakaway regions.

Divisions within the 27-member bloc have prompted the French presidency of the EU to drop references to the talks resuming in November in a preparatory document for Monday's meeting.

In Luxembourg, foreign ministers were also set to discuss whether to lift or lighten their current visa bans on top Belarusian officials as a response to Minsk's decision over the summer to release its last political prisoners.

Officials say some EU member states are keen to encourage Belarus to take a pro-Western path in the wake of the Georgian conflict, in spite of the fact that the country's parliamentary elections, held on Sept. 28, were judged by international observers to be deeply flawed.

No opponents of President Alexander Lukashenko succeeded in winning any parliamentary seats.

Europe shouldn't give Russia too much credit for pulling troops out of Georgian buffer zones. The move doesn't go far enough in proving that Moscow wants to be a true European partner, writes DW's Ingo Mannteufel. (09.10.2008)

Russia has withdrawn troops from all checkpoints inside Georgia around the breakaway regions of South Ossetia and Abkhazia, Georgian and Russian officials said Wednesday. (08.10.2008)

Russian President Dmitriy Medvedev and German Chancellor Angela Merkel on Thursday were at odds over the Caucasus in opening statements delivered at an annual bilateral forum in St. Petersburg. (02.10.2008)

EU talks with former-Soviet republics with eye on Russia 15.12.2021

As tension with Russia simmers, the leaders of European Union nations met with the heads of five former Soviet republics. The so-called Eastern Partnership looks to deepen political, trade, energy and cultural ties.