EU parliamentarians have called on the Commission to look into Colombian intelligence operations in Europe designed to ‘neutralize the influence' of critics of the Colombian government in parliament, the UNHCR and NGOs. 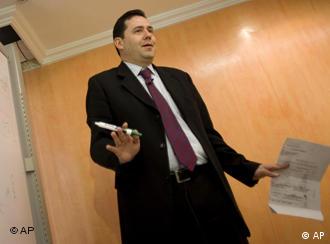 The call is supported by the head of the parliament's human rights commission, Heidi Hautala, British socialist Richard Howitt and Green deputies Ulrike Lunacek and Barbara Lochbihler as well as the International Federation of Journalists and other NGOs.

The parliamentarians have also called on the Colombian government to give a full accounting of alleged illegal activity in Europe of the Department of Administrative Security (DAS), the Colombian agency charged with internal security.

"The Colombian government needs to clarify in what way the DAS acted against non-governmental or political organizations to influence and disqualify decisions made by the Human Rights Commission for the European Parliament," Lochbihler and Hautala said in a statement on the eve of the EU's signing of a free-trade agreement with Colombia.

Some parliamentarians believe that the EU is reluctant to publicly denounce the Colombian intelligence operations because of Colombia's strategic importance as a Western ally on Venezuela's border and its domestic fight against powerful drug traffickers. EU officials fear that an investigation could torpedo ratification of the free-trade agreement, which they see as crucial support of Colombia.

Parliamentarians and victims of the DAS operation believe that Belgium, which took over the EU Presidency from Spain on July 1, may be more inclined to investigate the issue because much of the illicit Colombian activity occurred in Brussels and Belgian citizens and residents - including European Parliament Green faction legal advisor Paul-Emile Dupret, Patricia Verbauwhede of the Belgian Catholic charity Broderlijk Delen and Luis-Guillermo Perez, the Brussels-based Secretary-General of the International Federation for Human Rights - were targets of what DAS dubbed 'Operation Europe.'

The operation aimed to discredit entities and persons critical of Colombia's alleged abuse of human rights in its war on insurgents and drug traffickers through smear campaigns in the media and on the Internet and the establishment of fake NGOs in Europe. That's according to Colombian court documents and critics, including Claudia Julieta Duque, a journalist who was forced to leave Colombia because of her coverage of government cooperation with right-wing paramilitary groups. 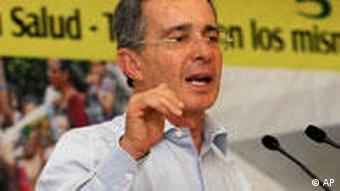 How much did outgoing President Uribe know about the covert operations?

The documents became public in legal proceedings in Colombia against former DAS chief Jorge Noguera, who headed the 2002 election campaign of outgoing President Alvaro Uribe. Noguera is charged with overseeing the illegal wiretapping and surveillance in Colombia of judges, politicians, journalists, trade unionists and NGO activists as well as DAS's foreign operations.

The documents refer to Operation Europe as 'a legal war' and describe DAS's tactics as designed to neutralize "the destabilizing actions of NGOs in Colombia and the world."

These tactics involved sowing controversy about and dissent within NGOs and opposition groups and faking links between critics of the government and illegal armed groups. They describe the fabrication of a guerrilla video featuring a Colombian journalist and requests to cancel his visa for travel abroad as well as false allegations of corruption and adultery, death threats and blackmail of critics of the government.

Human rights activist Perez reported to Belgian police last October the mysterious theft of three computers and a hard disk from his home in Hoeilaart in Belgium. In a meeting with NGOs in March in Brussels, newly-appointed DAS chief Felipe Munoz declined a request by Perez to see his DAS file.

An unidentified caller from Colombia advised Perez's mother several weeks later, according to Belgian daily Le Soir, that "the Colombian president may be leaving (office) but we will always be here and we will always know how your children and their families conduct themselves."

Dupret, the European parliament legal advisor, said he first encountered problems when in 2004 a website published a falsified note under his name suggesting that he supported the Revolutionary Army of Colombia (FARC), designated by the US and the EU as a terrorist organization. The note contained excerpts of a private mail sent from his parliamentary email. Dupret denies ever having had contact with FARC.

The note appeared shortly after he had been involved in a protest against a visit to Brussels by Uribe. Several months later, in transit at Miami airport en route from Caracas to Europe as part of a parliamentary delegation, Dupret was pulled aside by US officials and questioned for several hours about his ties to Colombia and articles he had written. 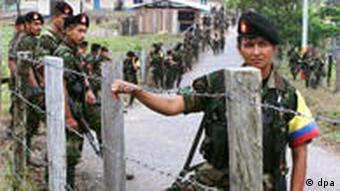 He has since been put on a US no-fly list. US authorities in September 2009 forced an Air France flight from Paris to Mexico to evade US air space because Dupret was on board. Dupret and others targeted by Operation Europe have taken their case to court in Brussels and are preparing to also file suit in Bogota.

"The information compiled by DAS, which is part of a file called 'Europa,' makes reference to data collected in 2004 and 2005 whose sources were published in the media and at public events. The collection of this information did not involve any kind of irregularity in intelligence material, nor any violation of the rights of European citizens," the ministry said in a statement. Colombian officials said the file was created to determine what influence FARC may wield in Europe.

Colombian prosecutors, however, charge that DAS's wiretapping was sanctioned by senior government officials. Prosecutor Misael Rodriguez told a court hearing in April that the wiretapping "was directed from Casa de Narino," the presidential palace.

In a report to the court, attorney general Guillermo Mendoza Diago detailed discussions in April 2008 between senior officials in Uribe's office and DAS representatives about the illegal wiretapping operations. The US Congress, in response to the charges, has prohibited US funding of DAS under the fiscal year 2010 foreign operations appropriations bill.

EU officials say an investigation could be counterproductive given Colombian statements that DAS may be disbanded. They also point to expected Colombian parliament approval of a new law drafted by Uribe that would reorganize DAS and put it under stricter supervision.

The MEPs as well as the DAS's European targets and Colombian activists charge the draft law does not go far enough. In a statement, the Colombian Commission of Jurists, which according to the court documents was one of the NGO's under DAS surveillance, said the law does not "establish adequate, effective and independent oversight of intelligence activities."

The European Union is close to reaching a free trade deal with Colombia. But human rights watchdogs, trade union organizations and some politicians believe the agreement would send all the wrong signals to Bogota. (11.03.2010)

New Colombian President Juan Manuel Santos faces a difficult month before his inaugeration in August as the UN Human Rights Council is expected to hear allegations about his and his predecessor's role in civilian deaths. (12.07.2010)