European travelers will no longer have to pay roaming charges for using their mobile phones within the EU after the 28-nation bloc has finally reached a deal that will take effect in June. 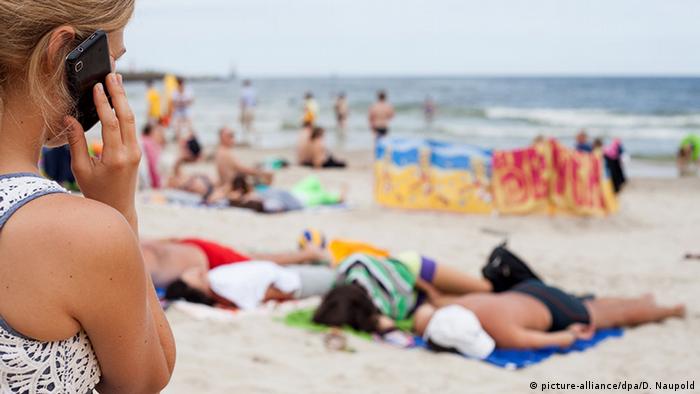 During negotiations going into the early hours of Wednesday, representatives from the European Parliament, member states and the EU Commission finally struck a deal that delivers on a free roaming promise first made by Brussels in early 2015.

Under the agreement, European mobile operators can charge each other fees that will be capped at 0.032 euros ($0.035) per minute for voice calls and 0.01 euros per text message. Caps on charges for mobile data use will be set at 7.7 euros per gigabyte, with the price gradually reduced to 2.5 euros by 2022. The new caps will be about 90 percent lower than the current ones.

"This was the last piece of the puzzle. As of June 15, Europeans will be able to travel in the EU without roaming charges," said Andrus Ansip, the commission's vice-president for the Digital Single Market.

'We have to create the Digital Single Market'

Europe has achieved a single market in the offline world. But what about the bloc's digital realm? DW speaks to Andrus Ansip, the European Commission's new vice-president for the Digital Single Market. (17.02.2015)

Europeans free to 'roam if you want to' - but without phones, without data

This was going to be a big year for Europe: an end to roaming charges (no worries texting at the beach), net neutrality, and new rules on data protection. Well, looks like we can forget the first of those. (06.03.2015)

The agreement has yet to be formally approved by the EU parliament and member states.

The agreement plan was long delayed due to resistance from European telecoms operators in tourist magnets such as Italy and Spain which complained of the deal's knock-on effects.

They complained that "free roaming" would in effect make poorer Europeans in the south pay for wealthy tourists phoning home or surfing for data while on holiday. They also threatened to hike domestic prices to pay for travelers from northern Europe using their networks.

Miapetra Kumpula-Natri, an EU lawmaker tasked with steering the legislation through the parliament, said that now the agreed caps would ensure cost coverage for efficient operators throughout Europe, but were low enough to sustain competition on the European telecom markets.

Roaming charges have long been a lucrative source of extra income for telecoms companies.