EU foreign ministers eye sanctions against Turkey, ahead of summit

German Foreign Minister Heiko Maas said "too many provocations" from Turkey had made it impossible to set up direct talks between Ankara and Athens over a gas dispute in the Mediterranean. 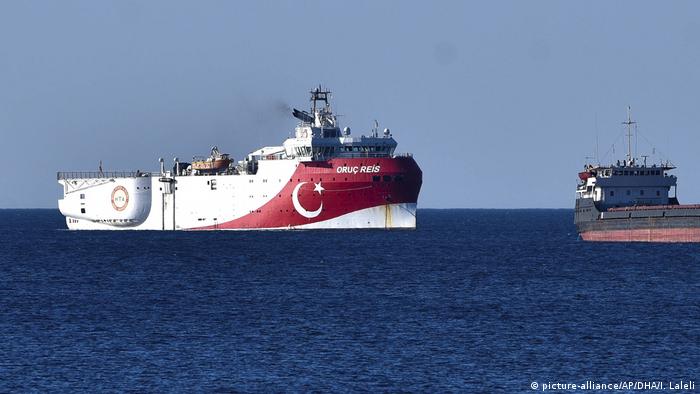 EU foreign ministers met on Monday to discuss the possibility of sanctions against Turkey over a gas dispute in the Mediterranean. The bloc's leaders are set to make a final decision on the matter during a summit on December 10, with a freeze on weapons exports among the possible measures under consideration for the NATO member.

Greek Foreign Minister Nikos Dendias said that there was broad agreement on the notion that Turkey had made no positive shift away from its policy of exploring in contested waters in the eastern Mediterranean.

Tensions flared between Greece and Turkey in August, when Ankara sent a survey vessel to map out energy-drilling prospects in waters also claimed by Greece.

The EU backed Greece in the dispute and held a summit in October, where European leaders warned Turkey to withdraw its energy research ships or face punitive measures.

Germany, which currently holds the EU's six-month presidency, is a key player in deciding whether sanctions should go ahead. Berlin had hoped to mediate between Athens and Ankara, but was angered when Turkey resumed its gas exploration off Cyprus in October after a pause.

"There have been too many provocations, and tensions between Turkey, Cyprus and Greece have prevented any direct talks," German Foreign Minister Heiko Maas said before the start of Mondays meeting.

France and the European Parliament formally called for sanctions on November 26, saying it was time to punish Turkey, which is seen in Brussels as fueling the dispute for domestic political reasons.

Turkish President Recep Tayyip Erdogan responded on Monday by calling for more negotiation, while urging the EU to rid itself of its ''strategic blindness'' and not let itself be used as a tool of Greece and Cyprus.

Yet, the Turkish president also said his country would ''not accept plans and maps that aim to confine us to the shores of Antalya,'' a reference to the maritime boundaries that Turkey says other countries are seeking to impose on it.