German diplomat Hansjörg Haber is to leave his post on August 1, the EU says, but has not given any reason. Turkish officials accused him of making offensive comments when discussing the EU migrant deal. 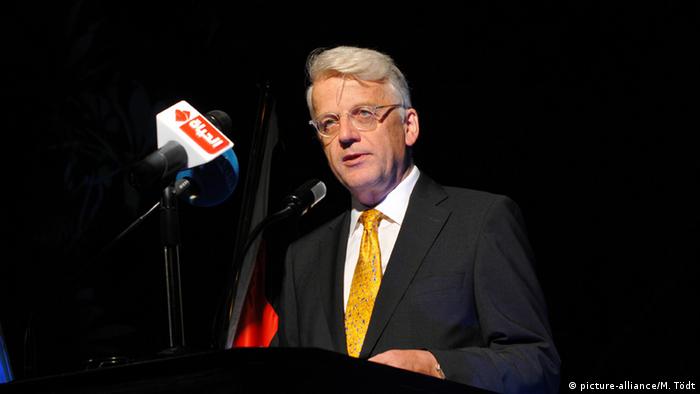 Hansjörg Haber's departure follows comments last month in which he criticized the Ankara government's conduct in negotiating a deal under which migrants arriving on EU shores are returned to Turkey, in exchange for others in Turkish refugee camps being sent to Europe.

Having been frustrated by Turkish officials resorting to bargaining tactics, he said: "We have a saying: 'Start like a Turk and end like a German.' But here it is the other way round," Turkish media reported.

At the time, Haber was summoned to the Turkish foreign ministry to explain his words, which they said evoked negative cultural stereotypes.

Turkish daily "Hürriyet" said EU foreign policy chief Federica Mogherini had demanded Haber step down, even though he'd only being in the post since October and despite an attempt by Berlin's government to ease tensions.

Haber's resignation comes a day before the European Commission is to publish a second report on progress with Ankara over the migrant deal.

Following Tuesday's announcement, Turkey's new minister for EU affairs, Omer Celik, said there was no point in Haber continuing to serve because he had "violated" two basic rules that ambassadors had to follow: "to respect the values of the countries they serve in as well as .... to respect the office of the president."

The EU delegation in Turkey confirmed that the German career diplomat would leave the position on August 1 and that a new ambassador would be appointed shortly.

Analysts said Haber's departure was indicative of the increasingly fractious relationship between Ankara and Brussels, as both sides try to implement the migrant deal. The plan is now in limbo after the EU halted plans to offer visa-free travel for Turkish citizens in return for curbing the refugee flow, as Turkey failed to meet the preconditions set by Brussels.

The EU has also pressured the Ankara government over its strict anti-terror laws, a law stripping Turkish MPs of immunity and its crackdown on the outlawed Kurdistan Workers' Party (PKK).

In theory, Ankara has been a candidate for potential EU membership since 1987, but major outstanding issues - not least the divided island of Cyprus - have all-but halted the process.

European Parliaments's Turkey Rapporteur in an interview with DW