A British proposal to exempt anti-regime rebels from an arms embargo against Syria has failed in Brussels. Meanwhile, a UN inquiry has called for alleged Syrian war criminals to face the International Criminal Court. 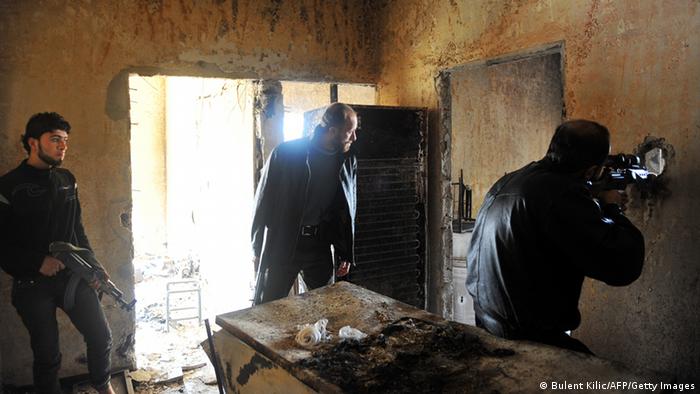 The European Union on Monday renewed sanctions against Syria for three months, keeping in place an arms embargo that applies to both the regime of President Bashar Assad and the rebels.

Britain – backed by Italy and other EU allies - had recently called for the rebels to be exempted from the embargo, so that European nations could arm them in their fight against Assad.

“We give them strong political and diplomatic support,” said British Foreign Minister William Hague as he arrived for an EU foreign ministers' meeting in Brussels on Monday. “We also give them assistance in terms of equipment at the moment to help them try to save people's lives.”

“I think there is a broader range of equipment that we can give them,” Hague said.

But the British proposal faced opposition among many of the EU's 27 member states. An internal report commissioned EU foreign policy chief Catherine Ashton had warned that lifting the embargo could lead to weapons proliferation among extremists groups.

“There is no lack of weapons in Syria, rather the contrary,” said Luxembourg Foreign Minister Jean Asselborn, echoing the sentiments of Austria, Cyprus, Sweden and Spain. “There are a lot of things lacking in Syria, but not arms. More arms will mean more deaths.”

Instead, the EU's 27 foreign ministers agreed on Monday to amend the arms embargo to

Is a road map for peace in Syria in sight?

The Assad regime in Syria has been fighting insurgents for the last two years, but neither side seems strong enough to defeat the other. Now, the government and the opposition appear to want to negotiate. (18.02.2013)

“Technical assistance and protection of civilians will be easier,” French Foreign Minister Laurent Fabius said after the meeting, without elaborating.

Meanwhile, a United Nations inquiry into war crimes in Syria issued its report in Geneva, Switzerland on Monday, compiling a list of suspected war criminals. After conducting interviews with refugees who fled Syria, the inquiry panel identified a series of massacres during the six-month period leading up to January 2013.

“We identified seven massacres during the period, five on the government side, two on the armed opponents side,” said Carla del Ponte, a former ICC chief prosecutor who worked on the UN inquiry team. “We need to enter sites to be able to confirm elements of proof that we have.”

The report called on the UN Security Council to refer Syria to the International Criminal Court in The Hague (ICC), citing crimes against children, rape and sexual violence sanctioned by high-ranking officials.

Although the report accused both the rebels and the Assad regime of war crimes, it said that Damascus bore greater responsibility for human rights violations.

“The violations and abuses committed by anti-government armed groups did not, however, reach the intensity and scale of those committed by government forces and affiliated militia,” the report said.

The United Nations estimates that 70,000 people have perished in Syria's two-year-long civil war. And at least 700,000 refugees have fled the fighting in Syria for neighboring countries, according the UN refugee agency.