The European Union has delayed the reopening of accession talks with Turkey for at least four months but says the path stays open. Germany, Austria and the Netherlands hesitated, citing Turkey's crackdown on protestors. 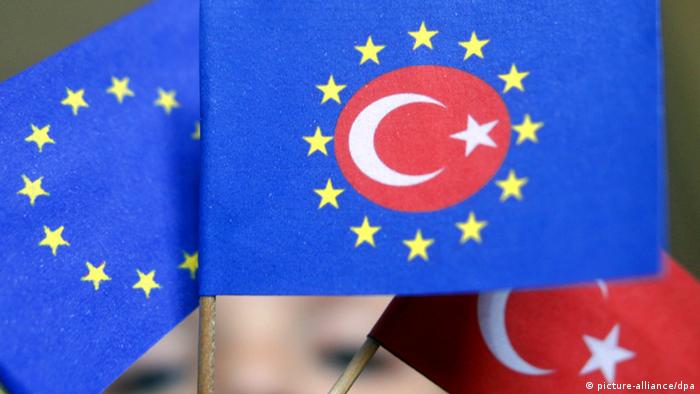 EU nations agreed in a compromise on Tuesday to reopen talks on Turkey's lengthy bid for membership of the bloc, but set a delay of at least four months as a rebuke for Ankara's tough crackdown on protestors in recent weeks.

The deal was concluded in Luxembourg after consultations between German Foreign Minister Guido Westerwelle and his Turkish counterpart Ahmet Davutoglu, who said it was important that "Chapter 22 has been opened. This matter is over."

Davutoglu was referring to one of 35 policies that candidate states must satisfy before gaining entry to the EU. Talks on Chapter 22, which deals with regional policy, had been due to reopen on Wednesday.

Westerwelle said it was a "good decision in a difficult situation."

Accession talks began with Turkey in 2005, 18 years after it applied, but so far only one of the chapters has been agreed.

Protests that began in Istanbul on May 31 and spread across Turkey were met by heavy police crackdowns that left four people dead and about 7,500 injured.

Germany's objection to a prompt resumption of talks on Chapter 22 led to tensions last week, with both Berlin and Ankara calling in the other's ambassador for explanations. Chancellor Angela Merkel had said she was appalled by the Turkish crackdown on protesters.

The delay until at least October postpones that next round of talks until after Germany's federal parliamentary election due on September 22 and the release of annual reports by Brussels on reform within EU candidate nations.

Other EU nations, notably Sweden, argued that the EU must keep Turkey – a predominantly Muslim country of 76 million people – on the path to membership.

"I said to the prime minister that there is a judgment [of the European Court of Human Rights] that it is not acceptable to shoot tear gas into a closed room which happened here in a hotel reception," Jagland said.

Erdogan said the hotel's owners had harbored "criminals." His remark came on Tuesday as he gave a speech to his Islamic-rooted party in parliament. He reiterated that the recent protests were part of a conspiracy to harm Turkey.

US President Joe Biden signs series of orders, including rejoining Paris climate accord 46m ago