EU Considering WTO Action Over US Auto Industry Aid | Europe | News and current affairs from around the continent | DW | 14.11.2008

The EU is ready to go to the World Trade Organization should US governmental aid to its struggling auto industry be deemed "illegal" by European lawyers, Commission head Jose Manuel Barroso said Friday. 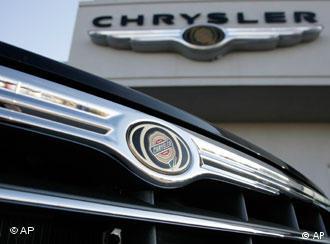 Chrysler, along with General Motors and Ford, have been asking for a US bail-out

"We are looking at the (US) plan. The plan has not yet been made official but certainly, if it amounts to illegal state aid we will act at the WTO," Barroso told Europe 1 radio when asked about the US bailout package.

An aid package worth $25 billion was approved by the US Congress in September. The package was earmarked for investment in new generation technology but no timetable was fixed for payments to be made.

Since September, all three of the US major car manufacturers -- General Motors, Ford and Chrysler -- have been hit by the global financial crisis which has savaged the US economy, prompting the auto giants to call for bail-out assistance in much the same way as the country's banks.

US president-elect Barack Obama raised the issue of help for the industry with the aim of protecting jobs in the US industrial heartland but President George W. Bush has been reluctant to take action.

The WTO has a trade dispute mechanism to which aggrieved parties can take their complaints for settlement. If the EU deems the US package to be illegal state aid, the Commission will activate the mechanism in an attempt to win compensation.

Euro zone leaders say they are working together to coordinate an aid package for European carmakers hit hard by the financial crisis. (11.11.2008)

Tough times ahead: For the second time in only three months German car giant Daimler reduced its expected profit for the next quarter. The expected annual profit drops from almost 8 down to 6 billion euros. (23.10.2008)

German politicians are skeptical about a $700 billion US bailout of markets and of calls to take similar measures as Chancellor Merkel criticized Washington for failing to implement stringent market controls. (21.09.2008)