EU Budget Commissioner Günther Oettinger's comments to DW that market pressures could "play a role" in voting habits in Italy have landed him in hot water. The German politician has since apologized.

Watch the interview in full here

In an interview with DW, Oettinger said he was not fearful that a fresh election would strengthen Italy's populist parties — a development which observers say could lead to the country leaving the eurozone or even the European Union. Instead, he thinks financial markets and the state of Italy's economy will convince voters not to pick left-wing or right-wing populists.

"Even now, developments on bond markets, the market value of banks, and Italy's economy in general have darkened noticeably and negatively. That has to do with the possible government formation. I can only hope that this will play a role in the election campaign and send a signal not to hand populists on the right and left any responsibility in government," Oettinger said.

Outrage followed quickly. Matteo Salvini, head of right-wing party The League, lashed out on Twitter, writing: "Crazy, in Brussels they are without shame. The EU Budget Commissioner the German Oettinger says the markets will show Italians the right way to vote. If that isn't a threat … I am not scared!” He then demanded that Oettinger resign.

European Council President Donald Tusk and European Commission President Jean-Claude Juncker have distanced themselves from Oettinger's comments. Juncker said that Italy's fate "does not lie in the hands of the financial markets," adding that "Italy deserves respect."

Responding on Twitter, Tusk said: "My appeal to all EU institutions: please respect the voters. We are there to serve them, not to lecture them.”

In the wake of the uproar, Oettinger apologized, saying: "I fully respect the will of voters being left, right or center and in every country. By referring to the actual market developments in Italy, I did not mean to be disrespectful."

During the interview, Oettinger had also expressed his confidence in Italy's interim technocrat government.

"We trust the Italian president, who has been pointing out to potential governmental coalition partners the rights and duties that go together with membership in the European Union and the eurozone," Oettinger said.

Speaking more broadly about the perception of the EU, Oettinger told DW that the rise of populism around the world allows Europeans to see the EU in a more favorable light. "That is linked to [Turkish President Recep Tayyip] Erdogan, [US President Donald] Trump and Brexit. People are beginning to see that it is possible to take concerted European action." 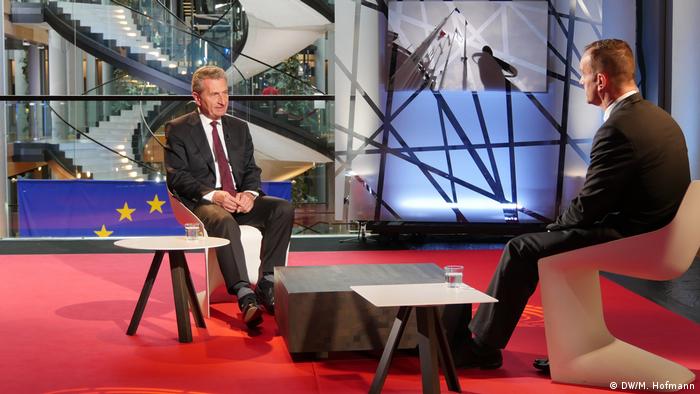 The advantages of the EU are plain to see in the context of the "looming trade war" with the US, Oettinger said. "What could a country like Italy or Germany do on its own? Thanks to the European common market, we can find a united response to Trump. That's something even EU critics within the bloc's member states should acknowledge," Oettinger said.

So what does Oettinger make of Hungarian Prime Minster Viktor Orban, who rails against the EU in his own country, but is nevertheless more than happy to accept funds from Brussels? "We must take note of that. But it's not acceptable, as I must say generally. Governments in all member states tend to nationalize successes and Europeanize their problems. That's unfair," he said.

A common European answer to Trump

Oettinger defended planned EU regulation that ties funding to honoring the rule of law – a regulation that could create tensions with Hungary's Orban and the current Polish government. But Oettinger says this is not intended as a carrot-and-stick approach. "Our main concern is European taxpayers. We invest billions and must be sure that EU members and their administrations ensure resources are properly managed and accounted for. That can lead to tensions. It might be necessary to go to court to prevent fraud, corruption or embezzlement involving EU funds. Which is why we need an independent judiciary. Judges must be fully independent to maintain the rule of law," he said.

On the topic of trans-Atlantic relations, Oettinger said that while Europe's ties to Trump are strained, the US remains its closest ally. However, things could change if the US does in fact impose duties on EU imports. In that case, Oettinger said, Europe will close rank, regardless of which member state is most affected. "If a duty is imposed on cars, we all need to stand together and help each other," he said. "If a duty is imposed on Bordeaux wine or Italian products, then we all need to show support. If we don't support each other, then the bloc as a whole loses."

Watch the interview in full here