The EU has chided Prime Minister Mateusz Morawiecki for using belligerent terms in a row with the EU over rule of law. In an interview, Morawiecki said the EU withholding funds would be like starting "World War III." 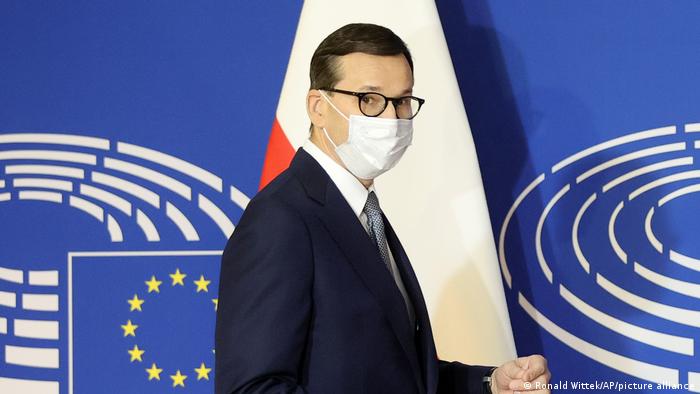 Speaking in Brussels last week, a defiant Morawiecki said Warsaw would not respond to EU 'blackmail'

The European Commission on Monday gave a sharp reprimand to Polish Prime Minister Mateusz Morawiecki after he said it would be like starting World War III if the bloc were to financially sanction Poland over rule-of-law issues.

Commission spokesman Eric Mamer told a briefing that the EU was "a project that very successfully contributed to establishing a lasting peace among its member states," adding that there was "no place for rhetoric referring to war" among the bloc's members.

What did the Polish premier say?

Morawiecki told the British daily Financial Times that the EU was putting a "gun to our head" in threatening financial penalties if Warsaw did not reverse recent judicial reforms in line with the bloc's principles.

Morawiecki also used highly martial terminology while suggesting that Poland might be ready to use its veto power to block legislation as retaliation if the EU were to put pressure on it over climate issues.

"If they start the third world war, we are going to defend our rights with any weapons which are at our disposal," he told the newspaper.

His remarks come as the European Commission said it would withhold billions of euros from Poland that have been earmarked in a pandemic recovery plan if Warsaw doesn't reverse the reforms.

What is behind the EU rule-of-law row with Poland?

The EU has been at loggerheads with Poland for years over a number of changes the ruling Law and Justice party (PiS) has made to the country's courts.

Brussels believes the reforms are detrimental to democracy in the country, notably one establishing a new disciplinary chamber for judges that the European Court of Justice has found to be illegal. Poland has promised to close it down, but has not yet done so.

'Constitutional Court in Poland is a marionette court'

More recently, a ruling by Poland's Constitutional Tribunal that some key parts of EU law were not compatible with the nation's constitution raised fears in Brussels that the country was directly challenging the legal unity of the bloc.

Brussels has also strongly criticized several measures introduced by the PiS that negatively impact the rights of migrants, women and LGBTQ people.

At a summit of European Union leaders in Brussels last week, Morawiecki said Poland was "ready for dialogue" but would not "act under the pressure of blackmail."

"I have the impression that Mr. Morawiecki has recently had some problems with English or that he has lost his mind," tweeted Marek Belka, a former Polish prime minister who is now a member of the European Parliament.

Donald Tusk, the former president of the European Council and now the head of the leading opposition party in Poland, said of Morawiecki's comments that "in politics, stupidity is the cause of most serious misfortunes."

The government spokesman, Piotr Muller, has told Polish media that the prime minister should not be taken literally.