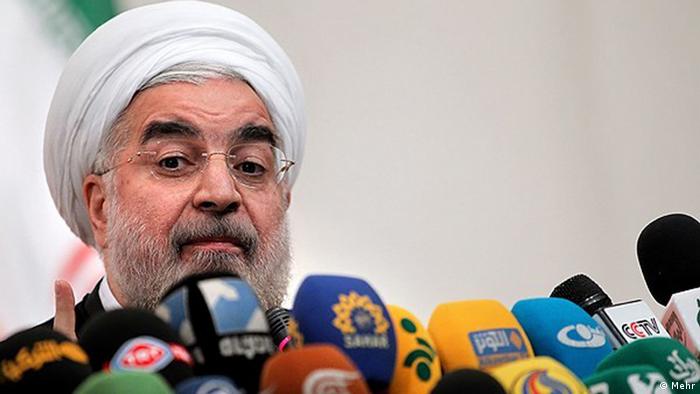 The conversation came after Iranian President Hasan Rouhani spoke at Zarif's inauguration ceremony, indicating that future foreign policy would be conducted in a more restrained tone than previously.

A statement from Ashton's spokesman said that she had congratulated Zarif on his appointment to the post, and "underlined her continued determination and commitment to seek a diplomatic solution to the Iranian nuclear issue."

The statement said that Ashton, who represents the five permanent members of the UN Security Council plus Germany in the negotiations, had agreed to meet Zarif "soon."

Earlier in the day, Iranian President Hasan Rouhani had said that he was eager to resume talks after four rounds of negotiations since last year failed to produce results.

"We are ready to engage in serious and substantial talks without wasting time," Rouhani said, while warning that Iran was not prepared to be bullied by threats from the West.

"Foreign policy is not carried out by repeating slogans," said Rouhani, apparently alluding to the rhetoric of his predecessor Mahmoud Ahmadinejad. He succeeded Ahmadinejad after winning elections in June outright.

"One of the messages of the voters in the presidential election was that they wanted a change in foreign policy," Rouhani said.

"That doesn't mean abandoning our principles but it does mean a change of method," he said. "We are going to strongly defend our national interests but that has to be done appropriately, precisely and rationally."

Iran's departing nuclear chief, Fereidoun Abbasi-Davani, on Saturday announced that Iran had 18,000 centrifuges - 9,700 of which are enriching uranium to levels of 5 to 20 percent.

Of those, 1,000 are of a modern type that it is believed could significantly speed up the rate at which enrichment can take place. The May 2013 report by the International Atomic Energy Agency (IAEA) said Iran had installed a total of 689 such centrifuges and empty centrifuge casings.

Iran insists the enrichment scheme is for purely peaceful means, and that it has a right to develop the program as it sees fit. However, there is international suspicion that Tehran may be trying to develop nuclear weapons.