EU, Brazil look to capitalize on influence to help solve Honduras crisis | World | Breaking news and perspectives from around the globe | DW | 05.10.2009

When diplomats representing the European Union and Brazil meet in Stockholm Tuesday, one of the topics on the agenda will be the ongoing crisis in Honduras and how both sides can help promote a political solution. 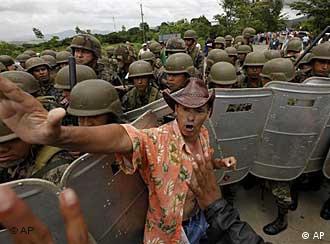 It is hoped a political solution can restore calm in Honduras

International concern has been rising ever since a military-backed coup forced leftist Honduran President Manuel Zelaya from office on June 28.

Honduras was plunged into a political crisis after the country's Supreme Court ordered Zelaya's arrest for allegedly seeking to illegally amend the constitution to allow presidents to serve more than a single four-year term.

The consequent military action led to Central America's first coup in more than a decade and sent Zelaya into exile. He eventually slipped back into Honduras almost two months later to claim sanctuary in the Brazilian Embassy.

In his absence, Interim President Roberto Micheletti took over the running of the country in the face of increasingly violent opposition to Zelaya's removal from power.

In the wake of the coup, France, Germany, Italy and Spain withdrew their ambassadors in protest. Two weeks ago, the EU decided to send back their envoys to help resolve the crisis, while stating that the move was not a reversal of the EU’s refusal to recognize the country's de facto government.

"The EU is more radical in its rejection of the coup and the de facto government than - for example - the United States," Peter Peetz, a Honduras expert at the German Institute of Global and Area Studies (GIGA) in Hamburg, told Deutsche Welle. "The EU policy vis-a-vis the Honduran crisis was influenced strongly by the Spanish point of view, especially that of Spanish Foreign Minister Miguel Ángel Moratinos. 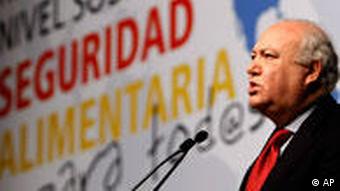 Moratinos was in favor of a hard stance on Honduras

"Some European governments, including the Germans, don't seem to have their own opinion at all, in this matter," Peetz added. "This is largely due to the fact, that there are very few people in Europe who are interested in Honduras and informed about the situation and develpments there, at least before the coup. So, the EU and member states seemed to have followed the Spanish leadership in this issue quiet blindly."

The EU has mellowed slightly after the return of the ambassadors with the Swedish presidency saying this was an important step in helping to restore constitutional order and a diplomatic process in Honduras. The EU, however, still maintains that any solution to the crisis must be a Honduran one.

"Honduran politics are not a threat to international peace and security, and, as a consequence, there should be a Honduran solution" to the stalemate, the Swedish foreign ministry said in a statement.

While the EU maintains that ultimately the crisis must be solved by the two rival factions, the bloc has an interest in influencing the outcome of any negotiations between Micheletti and Zelaya and Honduras will want to keep the EU onside as much as it can. 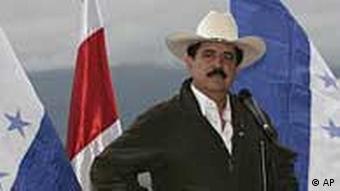 The EU is Honduras' third most important trading partner and the Central American country is a beneficiary of the EU's Generalized System of Preferences, a system of preferential trading arrangements through which the EU extends access to its markets to developing countries and economies in transition. The EU is also the principal donor of official development aid for Honduras.

"The EU is already involved with the crisis because it withdrew its ambassadors and has announced that it will not recognize the elections scheduled for late November if Zelaya does not return to office. As a result, the EU has therefore decided not to send election observers," said Peetz.

"Thus, the EU is already exerting pressure on the de facto government. Yet, the EU could engage more in mediating between the parties in conflict. So far, it has not done so, because accepting the Micheletti government as one partner for the dialogue would give him some kind of legitimacy - which the EU is not willing to award him."

Peetz believes that Brazil has become an important player in the crisis since Zelaya came back to Honduras and took refuge in the Brazilian embassy. Its leading role in the region also makes Brazil a heavyweight negotiator, one the EU could realistically join with in mediation to make a formidable partnership. 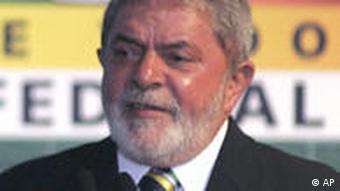 Lula da Silva's Brazil could gain from mediating in Honduras

"The ideological position of the Brazilian government - being sympathetic to left-leaning Zelaya but much more moderate than Chávez' Venezuela - enables it to some degree to mediate between the conflict parties," Peetz said. "The EU should cooperate with Brazil in this and should strengthen the Brazilian position by giving something like a 'mandate' to mediate in the Honduran crisis."

Peetz suggest Brazil's involvement in negotiations could strengthen its position in Latin America at the expense of its rivals.

"If successful in mediation, Brazil's position - in the longer term - would be strengthened as a regional power because rival Venezuela is largely seen internationally, and inside Honduras, as a player promoting conflict, instead of conflict solution," he added.

Hopes of a political solution rose over the weekend when Micheletti revealed that the two rival factions had begun talking to overcome the differences which have left the country divided. The interim president has until recently resisted pressure from the international community to seek a deal to reinstate Zelaya or lift an emergency decree imposed last Sunday that curbed civil liberties and shut two pro-Zelaya news outlets. 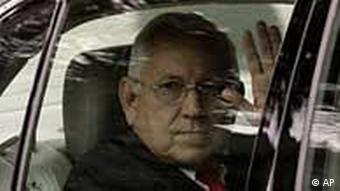 Micheletti has cracked down in an effort to restore order

But news that negotiators representing Micheletti and Zelaya had opened tentative negotiations to find a way to form a political amnesty and a unity government gives the international community an injection of optimism that Honduras can return to stability before the scheduled presidential elections on Nov. 29.

With the return of President Zelaya to Tegucigalpa, professor Guenther Maihold talks to Deutsche Welle about the international community, the Honduran power struggle and a situation that could become more complicated. (23.09.2009)

The European Union called for a "negotiated solution" to the current crisis in Honduras, as deposed president Manuel Zelaya dramatically returned to his country on Tuesday. He took refuge in the Brazilian embassy. (22.09.2009)