EU banana dispute ends in favor of Latin American exporters | Europe | News and current affairs from around the continent | DW | 15.12.2009

Bananas will likely be a few cents cheaper for European shoppers as a result of the settlement of the 'banana war' between Latin American banana exporters and the EU. 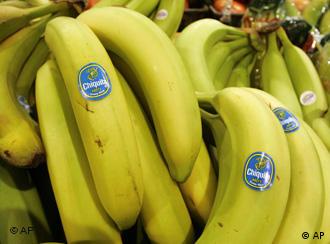 The longest trade dispute between the European Union and Latin American countries at the World Trade Organization (WTO) was settled on Tuesday.

Since 1993, the EU had discriminated against Latin American growers, favoring bananas from former European colonies in Africa, the Caribbean and the Pacific - a bloc known as the ACP states.

The so-called "banana dispute" focused on the import tariffs on bananas and other tropical fruits that the EU had imposed on Latin American banana imports, while fruit from former European colonies in ACP countries came to Europe tariff-free.

The European Union confirmed on Tuesday that it had clinched a deal with Latin American countries to end a long-running trade war over banana tariffs.

Big producers have most to gain

"The EU has also offered to mobilize up to 200 million euros for the main African and Caribbean banana-exporting countries to help them adjust to stiffer competition from Latin America," it said.

These EU funds should be distributed over several years and mitigate the negative consequences for small farmers in the former colonies.

US-based companies like Chiquita, Dole and Del Monte, with the largest plantations in Latin America, have the most to gain from the settled dispute. Last year the EU imported bananas with a total value of approximately 3 billion euros ($4.4 billion). 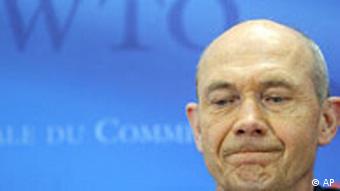 "This has been one of the most technically complex, politically sensitive and commercially meaningful legal disputes ever brought to the WTO," World Trade Organization director general Pascal Lamy said. "It has also been one of the longest running 'sagas' in the history of the post-World War II multilateral trading system."

"This proves that there is no trade issue which lies beyond the reach of WTO members," Lamy added.

But MEP Sven Giegold with the Greens criticized the working conditions in Latin America's large-scale plantations. Human rights and environmental standards, he said, are often abused by these large multinational corporations.

"No, we're not happy with it because our preference was always to maintain the tariff levels in order to provide some protection for small farmers," Giegold said.

The deal is likely to reduce prices for consumers in Europe, increase competition in the banana market and strengthen the Latin American position as low-cost exporters.

According to Ecuadorian delegates at the talks, full signatures would take place about four months after the document was initialled on Tuesday when all sides complete their respective national legislative processes.

Is the World Trade Organization fit for the future?

WTO ministers met recently for the first time in four years but didn't agree on reforms for the multilateral trading system. That was not the only opportunity missed argues DIE's Clara Brandi. (11.12.2009)

The World Trade Organization says there is renewed political commitment from the international community to successfully conclude the Doha Round. The WTO says a free-trade agreement is possible by the end of the year. (28.07.2009)