EU foreign ministers have approved new sanctions on Russia and separatists in Ukraine, including visa bans and asset freezes. However, implementation will wait until February 16 to give peace efforts more time. 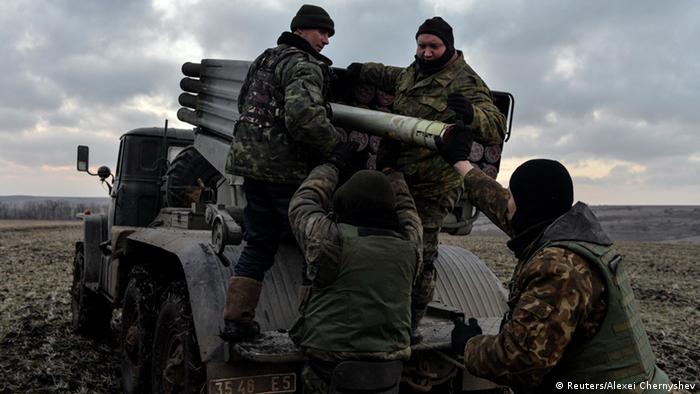 At a meeting in Brussels on Monday, EU foreign ministers approved new sanctions against Russia and Ukrainian separatists, but will wait until after Ukrainian, Russian, French and German officials meet in Minsk on Wednesday to try to broker a ceasefire before implementing them. In Berlin, officials from the four countries have begun attempts to revive a truce that has faltered constantly since it was agreed upon last September.

"The principle of these sanctions remains but the implementation will depend on results on the ground," French Foreign Minister Laurent Fabius said.

Last week, German Chancellor Angela Merkel and French President Francois Hollande had rushed to visit Moscow in an effort to persuade Russia's Vladimir Putin to come back to the negotiating table over the conflict, but their efforts ended without significant results. And German Foreign Minister Frank-Walter Steinmeier has also urged realistic expectations for the Minsk meeting: "We hope that the open points can be settled, but I have to say again, it is not yet sure."

Putin, however, has warned that the summit planned for the Belarusian capital would only take place if the leaders agreed on a "number of points" by then.

"We will be aiming for Wednesday, if by that time we manage to agree on a number of points which we've been intensely discussing lately," Putin told Belarus President Alexander Lukashenko in televised remarks on Sunday.

At least 1,500 Russian troops and convoys of military hardware crossed the border over the weekend, Ukraine's military reported on Monday. About 170 vehicles, including trucks, petrol tankers and cars also crossed the border, a military spokesman said.

Ukrainian officials and their allies in the United States and EU have repeatedly accused Russia of supplying troops and equipment to separatists battling government forces in the east of the country, though officials in Moscow have denied the allegations.

Some US officials have recommended that the country arm Ukraine's government, a prospect that many in Europe find dangerous. Merkel is in the US to meet with President Barack Obama for talks on the conflict.

The standoff in Ukraine was also the most discussed topic at the Munich Security Conference over the weekend.