Residents of Ethiopia's Sidama zone are voting in a referendum to decide if they want to become the country's tenth semi-autonomous state. The Sidamas have been campaigning for regional independence for decades. 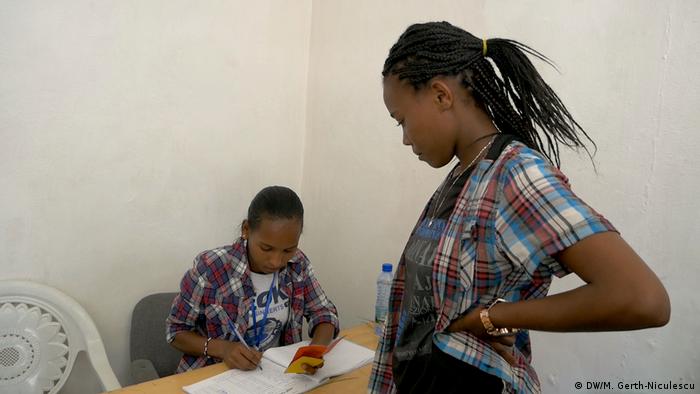 Mehret Beyeyne is hopeful. On Wednesday, November 20, she will cast the first ballot of her life in a referendum set to determine if her ethnic group, the Sidamas, will have their own semi-autonomous state. As she registers to vote, 21-year-old Mehret is optimistic about the future of her people. "I am ready to vote and I am very happy. I hope that everything will be finalized in peace so that we can all live together in harmony."

The long quest for regional independence

Ethiopia currently has nine administrative regions, mostly based on ethnicity. But the country is home to more than 80 ethnic groups, over half found in the southern part. The Sidama zone, with about four million residents, is part of the Southern Nations, Nationalities and Peoples' Region (SNNPR), home to over 40 ethnic groups. For decades the Sidamas, Ethiopia's fifth most numerous ethnicity, have been longing for regional independence, a right enshrined in the Constitution. But years of autocratic rule have failed to fulfill this provision.

By creating their own region, Sidamas hope to regain control of land resources, political representation as well as to reaffirm their cultural identity. "We lost our identity, we lost our culture and we lost our own administration," Tesfatsion Legesse, member of Ejjeetto, a Sidama activist group, explained. "We were oppressed. Now the Sidamas are beginning to regain their lost autonomy." 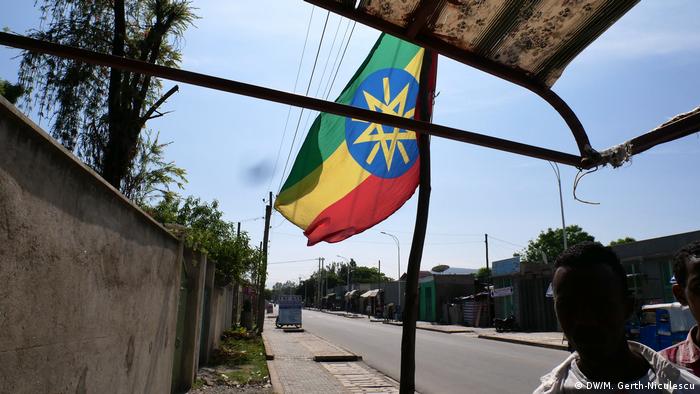 Even with the new government of Abiy Ahmed, who came to power in 2018 and is praised for liberalizing the country, Sidamas struggled to obtain a date for the referendum. In July, dozens were killed in clashes when they threatened to declare their autonomy unilaterally. The National Election Board thereafter scheduled the referendum to be held in November — a first in the history of Ethiopia's modern constitution and a decisive victory for the Sidamas, who feel their voices have been heard. Final results of the vote are set to be announced a week later on November 27.

"Before the Prime Minister came to power, when we asked for our freedom, this was met with suffering. We were beaten, we were put in jail. Now we are free to speak openly," said one of the few women activists in the Ejjeetto community. "Currently, there is more democracy than during the last regime. This creates better conditions for all Ethiopians."

As the date approaches, excitement is growing among the Ejjeettos.Proudly, Dr Tiro, one of the most famous activists, shows off his voter registration card. Gathered on a hotel terrace,Dr Tiro and his fellow activists talk about their hope to win the referendum by at least 90%.

But while Sidamas across the zone are widely in favor of autonomy, other ethnic groups fear the consequences of such a split. They worry, for instance, about equal access to jobs and other types of discrimination. In order to quell the fears, meetings were organized at local district level a few weeks ago. "We used to be afraid, but recently they gathered us … and they said nothing will happen to us," said Genet Mergia in a timid voice. "They said they will treat us equally once the regional state is created." 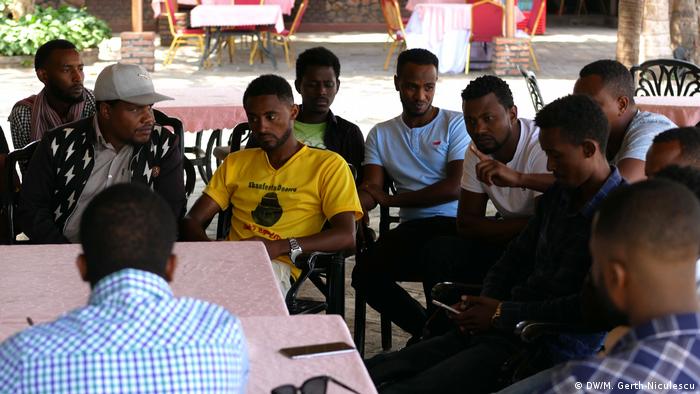 Dr Tiro (left, wearing a cap) and other activists of the pro-Sidama independence group Ejjeetto meet to discuss their communication strategy

Doubts persist though, partly due to misinformation regarding the process of creating a new region. The status of Hawassa, the current capital of SNNPR, set to become the capital of the new region, has also been subject to apprehension. "The community is suspicious. So to avoid this fear, the government and community should work together." Behailu, a young non-Sidama, insisted. "Some may not understand the details. What will be the benefits of becoming a regional state? What will we lose? I hope this will be discussed and awareness will be raised among the community at grassroots level."

Meanwhile, the Sidama Liberation Movement (SLM), the main Sidama opposition party in SNNPR, is planning ahead, hoping to gain some political power after the creation of a Sidama region. "We expect to establish a strong regional state which can represent the rights [of the Sidamas], their population size and economic situation," said Desalegn Mesa from the SLM. "This has to be done equally and equitably both at the regional and government level. It will be a very central task to be worked on after the referendum."

The Sidama referendum, if successful, will likely set a strong precedent for other ethnic groups who also expressed their wish for autonomy. In SNNPR, at least 10 other groups have the intention of organizing a referendum on regional independence, posing a significant challenge for Prime Minister Abiy Ahmed.

"Holding the Sidama referendum will strengthen the claims of the other groups," explained William Davison, Ethiopia analyst at the International Crisis Group. "It looks as if the federal government and the regional government do not want any other zones splitting off. As there are no legal reasons to deny them referendums, this will therefore be a question of political management. That means higher political authorities negotiating with zonal leaders and activists, and trying to agree arrangements on the way forward which address some of their grievances," he added.

As national elections are set to be held in 2020, a peaceful outcome for the referendum would be crucial in order to prevent further instability countrywide. The creation of a tenth region, analysts say, would not be a reason per se to postpone the vote. But ethnic-based disputes, mainly over regional border issues and land ownership, have led to clashes across Ethiopia in recent years. Ensuring a smooth transfer of powers to the new region, and avoiding new resulting border disputes, will therefore be an additional trial for the current prime minister.