Ethiopian workers forced out of Saudi Arabia | Middle East | News and analysis of events in the Arab world | DW | 30.11.2013

As Saudi Arabia struggles with growing unemployment, it has deported tens of thousands of economic migrants, mostly Ethiopians. But they have little to return to in their impoverished homeland. 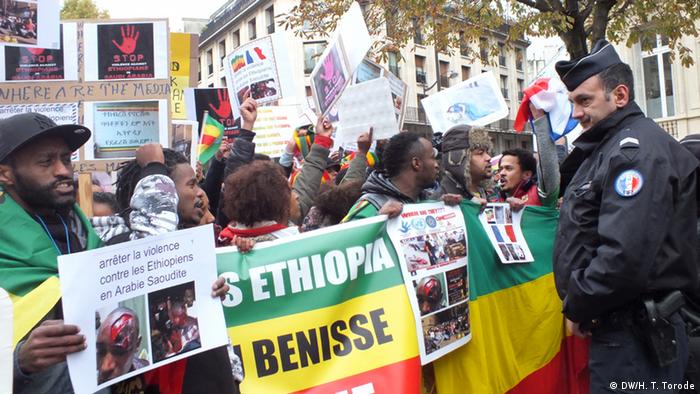 "I have witnessed terrible things," one young man said at the airport in Addis Ababa after arriving from Saudi Arabia. "Saudi youth militias did bad things to us Ethiopians. They killed some of us, they kidnapped and raped women and then killed them as well."

The man is one of around 50,000 Ethiopians working illegally in Saudi Arabia who were arrested and deported in recent weeks. The government in Addis Ababa has so far officially confirmed the death of three of its citizens.

"In the deportation prison they gave us dry biscuits, water and 900 Ethiopian birr spending money [about 35 euros]," a young woman in the airport terminal said. "I was able to buy the pants I'm wearing, otherwise I have nothing. What will become of me?"

The statements of the mostly young men and women who were forced to leave Saudi Arabia are similar. Many told of violence and xenophobia that forced them to leave. Now the returnees said they are worried about their future in Ethiopia, which is still one of the poorest countries in the world. 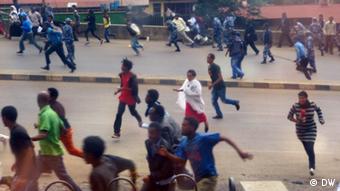 No one knows how many Ethiopians are living illegally in Saudi Arabia, government spokesman Getachew Reda told DW. The Foreign Ministry in Addis Ababa, estimated the number of returnees to be 80,000, and the number of people deported from Saudi Arabia is expected to grow.

Until now, Ethiopia has only seen a mass exodus of its citizens: Each year, tens of thousands of young girls leave the country to earn their living in Saudi Arabia or in the neighboring Gulf states as maids or babysitters. The labor ministry estimates 200,000 women left the country in search of work in 2012 alone.

Human rights groups, including Amnesty International, and the International Labor Organization have documented how migrant workers are exposed to physical violence, unhealthy working conditions and discrimination in Arab countries. They blame the "kafala" or "sponsorship" system, which, has also been criticized in connection with human rights violations in Qatar, host country of soccer's 2022 World Cup.

The system requires all foreign unskilled laborers to have a sponsor, generally their employer. Because the employer is responsible for their visa and legal status, workers are at their employer's mercy. Human Rights Watch recently charged that employers have extraordinary power over the lives of these employees, who thus have no right to organize or bargain collectively.

Dreary jobs for Saudis, too 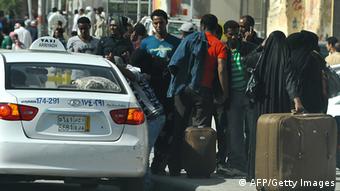 Behind the recent escalation in the traditionally close relationship between Ethiopia and Saudi Arabia is the high unemployment rate of over 12 percent in the kingdom. The comprehensive campaign against illegal aliens is meant to free up service jobs, which had almost entirely been performed by foreigners, for Saudi citizens. Until recently, there were 9 million foreign workers living among 27 million Saudis.

However, the campaign of deportations quickly spiraled out of control. Deportees reported that the authorities and Saudi citizens had resorted to violence. In Manfuha, the run-down immigrant neighborhood of Riyadh, Ethiopians armed with knives, stones and bottles fought street battles with Saudi youth militias and security forces, leading to deaths on both sides.

One hand doesn't wash the other

The Ethiopian government is attempting a balancing act between indignation and quiet diplomacy. A demonstration in front of the Saudi Embassy in Addis Ababa was broken up by force. Saudi Arabia is one of Ethiopia's largest trading partners and investors. Every year thousands of Muslim pilgrims also travel from Ethiopia to Islamic holy sites in Saudi Arabia.

"Was it not the Prophet himself, who sent his followers into exile in Ethiopia to bring them to safety there?" enraged Ethiopians asked in chat forums, referring to the historical ties between the two countries. "Do you show your gratitude by allowing Ethiopians to be mistreated?" they asked the Saudi king in a petition. 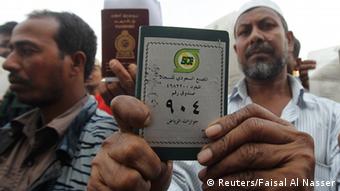 Work permits do not equal freedom for workers in Saudi Arabia

The mass repatriation is not just a burden on the cash-strapped Ethiopian treasury: The cost of bringing its citizens home is estimated at nearly 2 million euros. The economic damage is likely to be even higher due to the loss of remittances from tens of thousands of Ethiopians abroad, according to Addis Ababa economist Getachew Belete.

"Every day, ten planes land here with returnees," Belete said. "Each of these people supported families at home. A worker in Saudi Arabia feeds an average of five family members in Ethiopia."

In the face of high unemployment, Belete said he feared many of the returning women could turn to prostitution - social dynamite in deeply religious and conservative Ethiopia.

But a young woman who has just arrived at the airport in Addis Ababa has other plans. "We'll wait for now until the dust has settled, and then we'll go back to Saudi Arabia, but this time with legal status," she said.

The Ethiopian government has imposed a six-month ban on traveling to Saudi Arabia. But like hundreds of thousands of Ethiopians, she prefers the possibility of exploitation and violence in the Middle East to poverty in Ethiopia.

According to Negusse, Ethiopia is a very special place both culturally and historically. Not only do they have the best coffee in the world, but a trip here will make you a few years younger. (24.10.2013)

In the middle of Ethiopia, a country with strict religious and cultural mores, a village where women plough and men sew has become a model for development and poverty reduction. (15.10.2013)