Prime Minister Kaja Kallas has regained her parliamentary majority with the swearing in of a new government made up of a three-party coalition. Despite the return of stability, the PM has warned of "hard times" ahead. 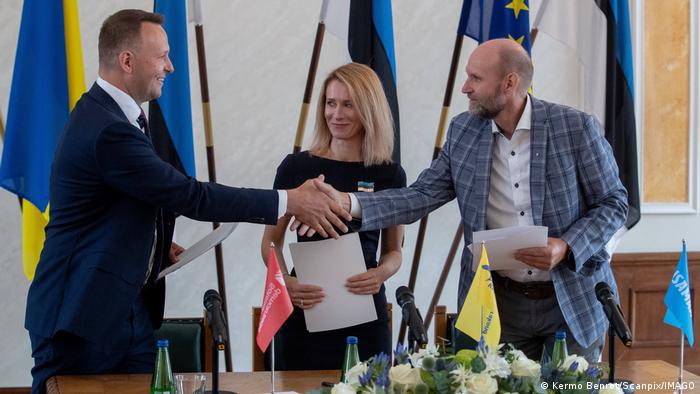 The Reform Party, Isamaa and the Social Democratic Party SDE signed their coalition agreement in the White Hall of the Riigikogu

The move comes after Kallas resigned last week, paving the way for the formation of a new coalition with her liberal Reform Party, the Social Democrats and the conservative Isamaa party.

The PM's warning of 'hard times' ahead

Kallas wasted no time pointing to the challenges facing Estonia's economy being battered by soaring energy costs and rampant inflation.

"It's going to be a very hard autumn, a very hard winter, and the elections are going to be after that. So it is of course (a feast) for all the (opposition) populists," she told Reuters in an interview ahead of taking the oath of office on Monday.

Estonia and fellow Baltic states stopped Russian gas imports following Moscow's invasion of Ukraine. Estonia has since been looking to secure supplies from non-Russian sources during the coming winter.

The new government is due to last until elections in March 2023.

"The time this government has to do its work is not long, while the problems that need to be solved are much more serious than usual," said President Alar Karis, the head of state, adding, "You will not get a vacation this summer."

What happened to the previous coalition?

June saw Kallas set to work looking for a new coalition after booting out her former coalition from government.

She broke up with the center-left Center Party after it sided with the far-right opposition EKRE party to block government reform of primary education.

The collapse of the government came on the 100th day since the Russian invasion of Ukraine.The Baltic state is bordered by Russia to the east and was ruled as an occupied Soviet Republic for more than 40 years before its independence in 1991. It is now a member of the European Union and the Western military alliance NATO.

Some eastern NATO members fear they might be the next targets of Russian aggression. Earlier this year, Kallas told DW that "our neighbor's problems today are our problems tomorrow. If we don't help out neighbors when their house is on fire, the fire will also catch your house."

Estonia's inflation bears down on pensioners