Erdogan under pressure after deadly mine explosion | Europe | News and current affairs from around the continent | DW | 14.05.2014

Erdogan under pressure after deadly mine explosion

The worst Turkish mining accident in decades has provoked allegations that the government is partly to blame for the deaths of more than 200 people due to negligence of safety measures. 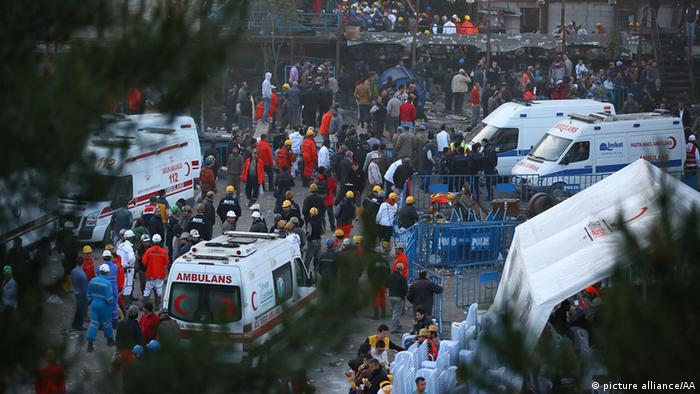 The prime minister's critics mobilized even as the search for survivors and victims of the coal mine accident in the western town of Soma gathered speed.

Opposition parties and unions called rallies against the government in several cities across Turkey. In some regions, students have gone on strike. The DISK union spoke of the "massacre" of the workers in Soma - a term that has made the rounds.

Prime Minister Recep Tayyip Erdogan's government has declared three days of national mourning and sent Energy Minister Taner Yildiz to Soma to coordinate rescue operations. The minister had little to do but to announce the ever-rising number of casualties. "We're losing hope," he admitted on Wednesday (14.05.2014) morning.

The government stands accused mainly of having neglected the supervision of the coal mines in the wake of their privatization over the past few years. There are not enough state inspectors for the mines and mere weeks ago, Erdogan's ruling AKP party rejected a motion by the opposition to look into security deficiencies at the Soma mine. Government opponents claim 22 people have died in fires in the coal mine since September 2012. 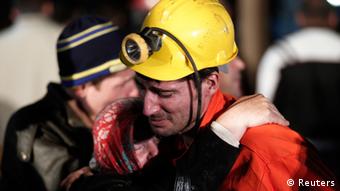 More than 350 miners were rescued

Erdogan's government faces allegations that it risked the health and lives of miners as a result of unilateral employer-friendly policies. Energy Minister Yildiz inspected the Soma mine last year, and praised investments in costly security systems for the employees that, it turns out, were insufficient.

"This is what it comes down to: The government ignored all warnings concerning the Soma mine, and the workers are paying the price," Murat Yetkin, a well-respected editorial writer, said on the website of Turkey's "Radikal" newspaper on Wednesday.

The death toll is expected to rise to between 350 to 400, said Hasan Ören, an opposition lawmaker who represents the Soma region in Ankara. It is the worst coal mining accident in Turkish history. An explosion in a mine near the Black Sea port of Zonguldak killed 263 workers in 1992.

On Turkish social networks, people have been calling for the respective government ministers to step down. Several spontaneous demonstrations were reminiscent of the anti-government protests last year in Istanbul's Gezi Park.

In the city's Levent business district, students and other protesters waving black flags demonstrated in front of the Soma-Holding mine operator's offices and sprayed the word "murderers" on the building in blood-red paint. Students gathered for protests at Ankara University, and more demonstrations were planned for the evening. The CHP opposition party has demanded a special session of parliament, while several unions called for nationwide strikes and protests on Thursday.

Security measures were tightened ahead of a visit by Erdogan and CHP leader Kemal Kilicdaroglu to Soma, with 4,000 police officers placed in the area.

'Afraid of the people'

Former union leader Cetin Uygur called the mine accident the "worst crime committed on workers in the country's history" on the Turkish union Internet portal Sendika.org. It's no wonder, he wrote, that the government has put so many security forces on alert in Soma: "It fears the people's reaction."

But for the most part, Wednesday was marked by grief and mourning for the victims. "Today is a day of pain, it's not the time to attack the government," editorial writer Asli Aydintasbas tweeted. But the attacks have already begun.

Working as a coal miner is a dangerous job. History shows that after explosions, collapses or flooding, there is often no way to save miners trapped underground. (14.05.2014)

In August, Turkey's president will be directly elected by the people, for the first time ever. Prime Minister Erdogan is expected to run - and observers fear he has plans to shake up Turkey's political system. (09.05.2014)

Industrial giants are seeking to exploit the Mahan sal forests' rich coal reserves. Forest dwellers and Greenpeace are fighting to save the pristine area, but time is running out, with mining due to be approved in March. (17.01.2014)