Turkey's president has said he'll withdraw all lawsuits against citizens who allegedly insulted him, as a one-off gesture. Erdogan has also told foreign critics of Ankara's purges to "mind [their] own business." 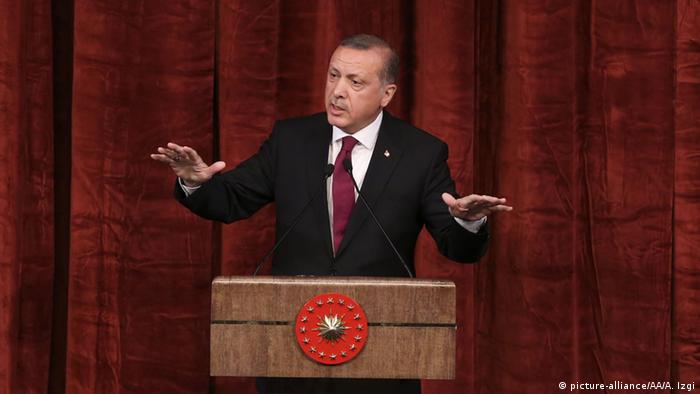 Speaking in Ankara late Friday, Turkish President Recep Tayyip Erdogan said his decision to drop the charges was motivated by feelings of unity against the failed coup.

"For one time only, I will be forgiving and withdrawing all cases against the many disrespects and insults that have been leveled against me," he said at the event commemorating the victims of the botched military takeover two weeks ago.

Erdogan described the move as a "new beginning."

"I feel that if we do not make use of this opportunity correctly, then it will give the people the right to hold us by the throat," he added. "So I feel that all factions of society, politicians first and foremost, will behave accordingly with this new reality, this new sensitive situation before us."

Böhmermann not off the hook

Under Turkish law, people found guilty of insulting the president face up to four years in prison. Over 2,000 people have been charged with this offense, some of them over content they shared on social media. Leaders of opposition parties are also among the defendants.

A satirical and controversial poem | Focus on Europe

Most famously, however, Erdogan also sued German satirist and television presenter Jan Böhmermann over an offensive poem he read on air in March, suggesting Erdogan engaged in bestiality and watched child pornography.

"The announcement only applies to Turkey. Nothing will change in Germany for the time being," Erdogan's lawyer Ralf Höcker told news agency DPA.

The president has won many of the lawsuits, including one against a former Miss Turkey for publishing a poem on Instagram about a high-level corruption scandal. A Turkish doctor was fired and arrested after sharing pictures comparing Erdogan with "Lord of the Rings" character, Gollum.

Journalist Cengiz Candar has also been put on trial, accused of insulting Erdogan in a series of columns criticizing Turkey's renewed conflict against Kurdish rebels. Earlier this year, Ankara caused a diplomatic incident by interrogating a Turkish-Dutch reporter over "insulting" tweets. She was temporarily forbidden from leaving Turkey.

In his speech at the presidential palace, Erdogan also criticized Western officials for not visiting Turkey after the coup.

"Not a single person has come to give condolences either from the European Union ... or from the West," he said.

The president also commented on the growing alarm caused by purges in the army, judiciary, education and the Turkish media.

"Some people give us advice. They say they are worried. Mind your own business! Look at your own deeds," he said.

"Those countries or leaders who are not worried about Turkey's democracy, the lives of our people, its future - while being so worried about the fate of the putschists - cannot be our friends."

A group of 21 journalists appeared before an Istanbul court on Friday as judges decided on whether to keep them in custody. The court freed four of them, but the rest were charged with "membership of a terror group," the state-run Anadolu news agency said.

The defendants include the well-known reporter Nazli Ilicak as well as the former correspondent for the pro-Gulen "Zaman" newspaper, Hanim Busra Erdal.

Foreign Minister Mevlut Cavusoglu defended the detention of reporters, saying it was necessary to draw the line between coup plotters and those "who are engaged in real journalism."

After Turkey's failed coup there has been violence and threats among Turks, including those in Germany. The question of where their loyalty lies is legitimate, but also shows Germans' own failings, writes Gero Schliess. (29.07.2016)