British socialite Ghislaine Maxwell was convicted last year of grooming some of Jeffrey Epstein's victims. The judge who sentenced Maxwell said she never expressed remorse for her role in the abuse. 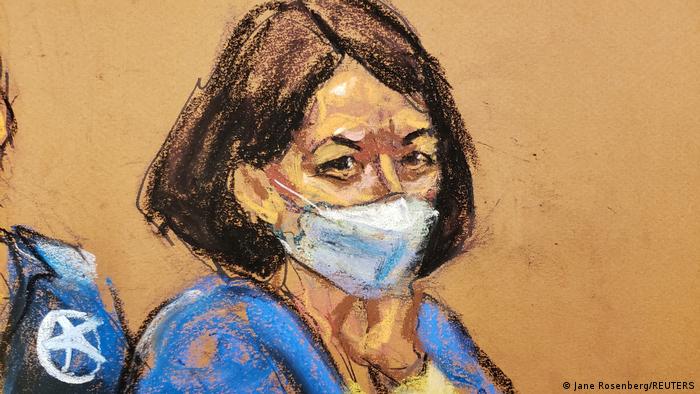 Prosecutors called for Maxwell to spend decades behind bars

Ghislaine Maxwell, the 60-year-old British socialite and longtime associate of sex offender Jeffrey Epstein, on Tuesday received a 20-year prison sentence for her role in facilitating the sexual abuse of teenage girls.

The sentence was handed down by US District Judge Alison Nathan who also imposed a $750,000 (€708,499) fine.  The judged noted Maxwell never expressed remorse and said that "a very significant sentence is necessary."

Meeting Epstein the 'greatest regret of my life,' Maxwell claims

Victims made sentencing impact statements in court about the role Maxwell played in their sexual abuse and urged Judge Alison Nathan to hold her accountable for her actions.

One of the victims told the court about the "significant shame" she felt due to her ordeal and said she sometimes felt like disappearing.

"Today, I can look at Ghislaine and tell her that I became what I am today in spite of her and her efforts to make me feel powerless and insignificant, and I will cast that empowerment on my daughter," the woman known as "Kate" said.

Ahead of sentencing, Maxwell told the court that she had empathy for the victims and that it was the "greatest regret of my life that I ever met Jeffrey Epstein."

Maxwell, who denies abusing anyone, was convicted in December on five charges related to recruiting and grooming four teenage girls to be part of Epstein's trafficking ring, though investigators believe the extent of her crimes to be far greater.

For decades, first as his girlfriend and then as his friend, Maxwell would help Epstein lure potential victims to the financier's many properties. Victims have said that Maxwell used her presence to lend an air of propriety when they were being invited to one of Epstein's estates.

Maxwell encouraged victims to have sexual encounters with Epstein or one of his wealthy friends, who allegedly included the UK's Prince Andrew. Former US President Donald Trump also spent time with the financier.

Her trial was seen as a reckoning for Epstein's crimes, as the then-66-year-old killed himself in 2019 while awaiting his own trial for child sex trafficking.

Maxwell was arrested in July 2020 and was repeatedly denied bail.

Prosecutors last week called Maxwell's conduct "shockingly predatory" and said she deserved to spend at least 30 years behind bars, based on their interpretation of federal sentencing guidelines.

Maxwell's lawyers had earlier said in court papers that she should be sentenced to about five years, arguing that she was being scapegoated for Epstein's crimes and that she had already spent significant time in jail.