Environment Podcast: On the Green Fence | Environment | All topics from climate change to conservation | DW | 20.11.2020 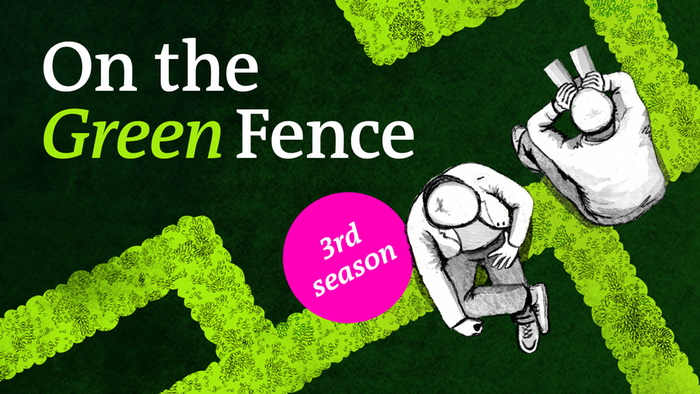 Series 3: Breaking down the meat machine

Neil and Gabe try to shed light on the clandestine world of industrial meat production in Germany - which has been dubbed the butcher house of Europe. Repulsed by what they discover, they look for ways out of the inexorable conflict that is our desire for cheap meat. They meet up with a mobile butcher for the “humane slaughter” of two calves, a huntress who will only eat animals killed in the wild, a vegan strongman who swears by plant protein and a vegetarian priest who is polarizing his flock. Join Neil and Gabe on a journey that has the potential to change them forever.

Prologue: An industry that is out of control

Over 750 million animals are slaughtered in Germany every year. While demand among Germans for meat is stagnating, production remains high thanks to lucrative exports. The meat industry is powerful and secretive, as Neil and Gabe discovered when they were turned away at the gate of Germany’s biggest meat packing plant. They talk to an ex-food inspector and an animal rights activist with a network of whistleblowers. The message is clear: Germany’s meat industry is out of control.

Episode 1: No transport, no suffering: Farmers Michael and Tina Jansen dignify the lives - and death - of their animals. That's why they've sought out mobile butcher Matthias Kürten. He takes his slaughterhouse on wheels to 300 farms each year. Neil and Gabe head to the Jansen homestead and connect with two calves about to be slaughtered. They're going to learn firsthand where meat comes from.

Episode 2: As the proverb goes, man is at the top of the food chain. Does that give us the right to kill animals? Rainer Hagencord, a vegetarian priest located in the Silicon Valley of German meat production, preaches against this. His exegesis of the Bible is plunging devout Christians into existential crisis. Some are leaving the church. Others welcome him as a prophetic voice the region deeply needs.

Episode 3: A vegan diet can cut your food-related emissions by 70 percent, but can you really grow big and strong without meat? Bona fide vegan Patrik Baboumian, once Germany’s strongest man, invites meat eaters Neil and Gabe to his vegan gym in Berlin to prove you don’t need chicken breast to grow muscle. But will this be enough to shake their deep-rooted skepticism towards veganism?

Episode 4: Locally hunted game has the smallest environmental footprint of all meat. The downsides of factory farming don’t apply to wild animals in the forest. This is why huntress Alena Steinbach won’t eat meat unless it’s killed in the wild. The former vegetarian with a degree in green business management takes Neil and Gabe deep into Europe’s largest forest for a hunt. What will they discover?

Global meat production is predicted to grow 85 percent by 2050. If this happens, it will have a cataclysmic effect on the environment. So how are we going to feed 10 billion people - who desire meat - without using more land and increasing atmospheric emissions? The answer to this question will have to include meat alternatives. But which ones have a chance? And what’s standing in the way?

You can subscribe to our podcast for free here:

On the Green Fence on Apple Podcasts

On the Green Fence on Spotify

What’s this podcast about?

On the Green Fence lives up to its name in looking at complex, often divisive environmental issues from multiple angles. It's not about greenism, but about exploring the broader context of the major concerns of our time in an engaging, explanatory and human way. DW reporters Neil King and Gabriel Borrud sit on the fence and look at these stories through the lives of real people across Germany. In
so doing, they aim to make sense of issues that affect us all, but which are often over-simplified or convoluted by ideology and lobbyism. On the Green Fence stands for an open-minded, relevant and entertaining approach to the environment.

Gabriel Borrud was born in Beaver Dam, Wisconsin, and after hanging up his golf clubs and dashed dreams of going pro, he attended Yale University. He studied philosophy and German and following graduation, he set off for the land of "Dichter und Denker".

Gabriel joined DW in 2008 and has worked as a reporter for radio and online ever since. 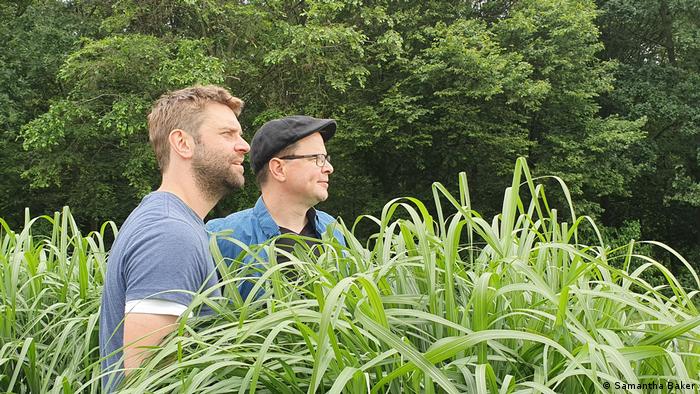 Neil King was born to British parents in southern Germany. He studied journalism and history in Heidelberg and Karlsruhe. Neil has worked as a reporter, host and editor for DW since 2007. He joined the environment section in 2019.

Neil and Gabriel have won international radio and podcast awards for their work.

More on the topic

Find our more about Neil and Gabriel and their podcast adventures on instagram,   twitter and facebook.You can download or subscribe to On the Green Fence atapple podcasts, spotify or wherever you get your podcasts.

How do you like this podcast? You can contact Neil and Gabriel directly and let them know which topics they should tackle in the future. Do it old school via email interaktion@dw.com or on social media.

The following conditions shall apply to all contests, quizzes, and games.

RSS Feed for On the Green Fence

RSS Feed for On the Green Fence

How does an e-car startup crack Germany's auto market?

The benefits of a car-free future

What is Germany's road map for climate-friendly cars?

Is eco-guilt changing the way we travel?

Can cruises kick-start the decarbonization of shipping?