An unprecedented algal bloom is making a splash in the Southern Ocean. Unlike in some other aquatic areas, the bloom there could be a blessing rather than a curse. 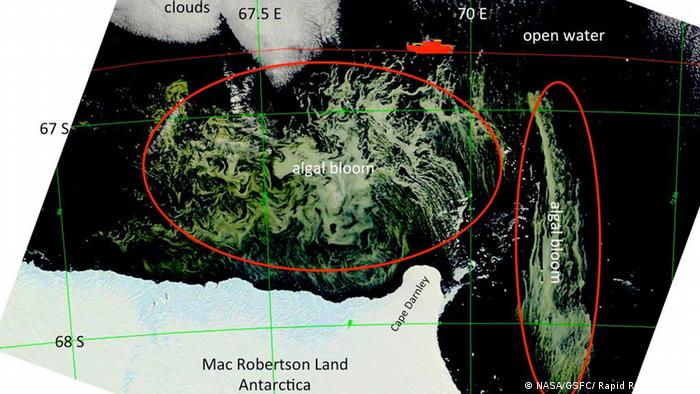 Scientists at the University of Tasmania have discovered a 20,000-square-kilometer (7,700-square-mile) bed of algae in Antarctica. The researchers became aware of the unusual bloom through satellite information from NASA, which captured images of huge, brownish-green spots in the waters of the ocean.

The German ocean glaciologist Jan Lieser, who conducts research in Hobart, Tasmania, explained that the algal bloom results from the interplay of three factors: an ice-free ocean, sunlight and the presence of nutrients, in this case iron.

Water in the region is typically low in iron, but strong winds could have blown dust and snow from the continent of Antarctica into the water, releasing the metal. 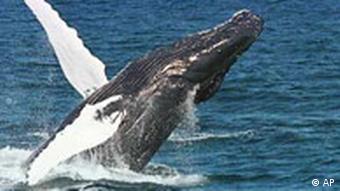 The algae spells a feast for whales and other aquatic predators

Lieser said that a second source of iron could be what's known as "fast ice," ice that forms in sheltered bays and remains over an extended period of time, even over several winters, and collects dust and dirt from the air.

"When it breaks up and drifts into the ocean, the sediment is released," Lieser said.

When it comes to the Adriatic or Baltic Seas, researchers are prone to talk about an "algae plague," but the situation is different in the case of Antarctica.

"I expect a feast," Lieser said. All manner of tiny sea animals, such as Antarctic krill, quickly snap up the short-lived algae. "Krill then becomes food for seabirds, penguins, seals and even whales," Lieser explained.

The researchers can't identify the exact kind of algae at the moment, although they think it may be in the Phaeocystis family.

An Australian research boat was near the algal bloom by chance, and scientists on board have already taken samples. The crew plans to bring the specimens to Tasmania, where they will be analyzed.

Test results won't be available for another few days still. In the meantime, it'll be a feeding frenzy in the Antarctic.

The World Bank has called for a new alliance to coordinate global action aimed at restoring the oceans' health. (24.02.2012)

The 2004 Indian Ocean tsunami devastated the Indonesian city of Banda Aceh. Today curiosity about the tragedy is driving a new kind of tourism there as the city struggles to make ends meet. (23.01.2012)