French President Macron embraced China's massive "Belt and Road" development project but said that trade must be a two-way street. He said Europe and China needed each other in the future, so they had to work together. 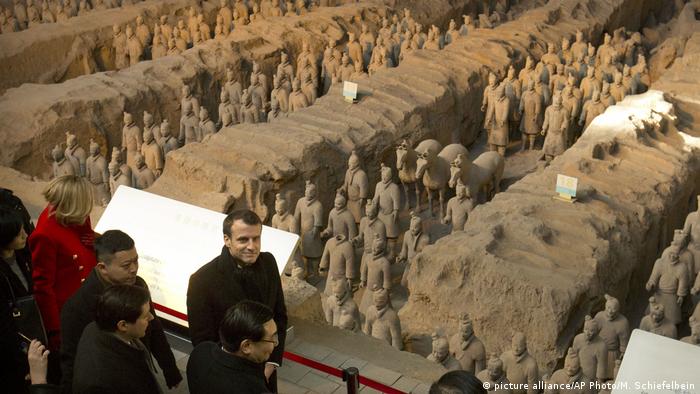 At the start of his three-day state visit to China, French President Emmanuel Macron gave voice to European concerns about Beijing's massive Silk Road revival plan while also calling on European leaders to put aside their concerns and support an effort that is aimed at developing trade.

"Our destinies are linked," he said during a keynote speech to businesspeople, academics and students at the Daming Palace — the royal residence for more than 220 years of the Tang dynasty — in the northern city of Xian, the starting point of the ancient Silk Road.

But Macron also warned China about European concerns regarding China's "Belt and Road" project — a massive $1 trillion (€830 billion) development plan aimed at reviving the ancient Silk Road that once generated a flourishing trade in fabrics, spices and a plethora of other goods.

Current concerns center around whether China simply wants to expand trade or its geopolitical influence.

"After all, the ancient Silk Roads were never only Chinese," he told the audience. "By definition, these roads can only be shared. If they are roads, they cannot be one-way."

That also hints at Macron's plan to take up France's annual $36 billion trade deficit with China during his bilateral talks with President Xi Jinping. Macron urged leaders to put aside whatever misgivings they may have, claiming that the future will require them to work together on various issues, including climate change.

"The future needs France, Europe and China," Macron said, adding that he planned to travel to China "at least once a year" during his tenure.

Macron said he also planned to talk to Xi about "relaunching the climate battle" by preparing an increase in their engagements to combat global warming at the next UN climate change conference (COP 24) in Poland later this year.

He praised China, the world's leading polluter by total emissions (but not per person) — while rapping US President Donald Trump for announcing that America would withdraw from the treaty.

"China kept its word," he said. "You demonstrate your immense sense of responsibility."

Cooperation will "show the world that the French and Chinese are capable of making our planet great and beautiful again," he said in Chinese.

Macron and his wife Brigitte began their official three-day visit to China in Xian, which was once the starting point of the ancient Silk Road.

The French delegation visited the city's famous terracotta warriors, the 8,000-man clay army, crafted around 250 BC for the tomb of China's first emperor Qin Shihuang.

After Xian, Macron will travel to Beijing with his delegation, which is made up of some 60 business executives and representatives from leading French companies, including aircraft manufacturer Airbus and supermarket chain Auchan.

Both parties are expected to sign numerous economic agreements on the third day, particularly in the fields of aviation and nuclear energy.

Sieren's China: In the stranglehold of global powers

DW's Frank Sieren thinks North and South Korea's newfound desire to talk has more to do with China than US. Unfortunately for Seoul, it is difficult to keep Beijing and Washington happy at the same time. (05.01.2018)