A new parliament is to be elected in Myanmar at the end of 2020 - the second general elections since the country embarked on a road to democracy. DW Akademie is training local media on election reporting. 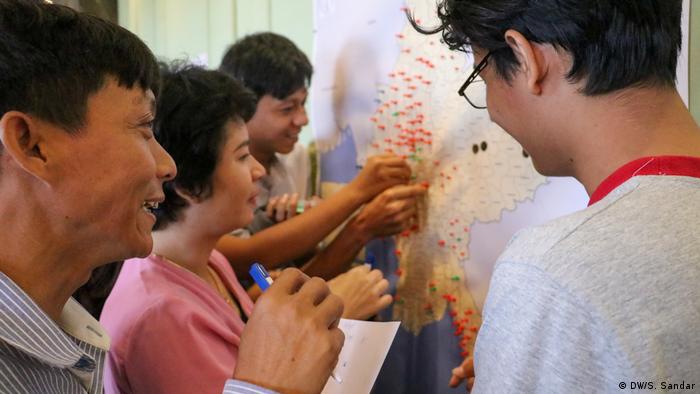 "This is practice – it's not actually happening!" explained Emma Dobinson and Pedro Noel as they kicked off the simulation exercise. The two trainers are from First Draft, the leading non-profit international network that combats disinformation. The mixed teams of journalists and fact-checkers were in the midst of a mock crisis scenario just ahead of Myanmar's general elections scheduled for the end of 2020. Rumors and disinformation were buzzing around the room as the teams tried to determine the facts and share them on Facebook as quickly as they could to inform the public. First Draft has redesigned these simulations so that they are more than just practicing how to verify false reports. "Participants learn how to work together and communicate with each other so they can get ahead with their stories and then present them to the audience in the right format, for the right audience and at the right time," Dobinson continued. "They did a great job today!" she added.

A need for cooperation and technology

Indonesia and the Philippines are leading the way as both countries already have successful co-operations between different media houses and civil society groups. Fact-checking networks such as Cekfakta and Tsek.ph aim at a joint approach to disinformation. Could that be a suitable model for Myanmar, too?

While it was clear during the training that verification tools are not an alternative to solid election reporting, they are very helpful. As a result, the Myanmar fact-checkers will be using Truly Media, DW's own verification platform, in the election year.