Suspected Islamists have hacked a Hindu priest to death in western Bangladesh. His murder comes as security forces report the first casualties in their nationwide operations against extremists. 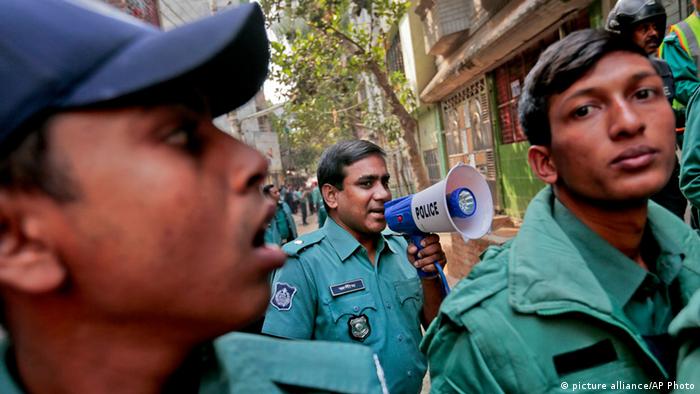 The 70-year-old Hindu priest, Ananda Gopal Ganguly, was found dead near his home in the village of Noldanga in western Bangladesh. Ganguly's head was nearly severed from his body, police said on Tuesday.

The priest had gone missing on his way to morning prayers. Witnesses said that three attackers on a motorcycle had hacked Ganguly to death. The attack took place in the Jhenidah district, which is about 161 kilometers (100 miles) west of the capital Dhaka.

No group has yet claimed responsibility for the killing but the attack bore the hallmarks of recent attacks by Islamists on the country's religious minorities and liberal activists.

"He (Ganguly) left home this morning saying that he was going to a Hindu house to offer prayers," the district's deputy police chief Gopinath Kanjilal said.

"Later, farmers found his near-decapitated body in a rice field. We do not know the identity of the killers… But the pattern of the killing is similar to ones carried out by local Islamist militants in recent time," Kanjilal added.

The attack came a day after the government banned more than one person riding pillion on a motorcycle.

Majority-Muslim Bangladesh has been reeling from a series of brutal murders of liberals, bloggers, secular activists and religious minorities by Islamist militants.

Some 40 people have been killed by jihadists over the past three years, police believe. In recent weeks, attacks claimed the lives of a Hindu trader, a homeopathic doctor and a Buddhist monk.

On Sunday, the wife of a top police official known for leading raids against Islamist militants in Bangladesh was murdered in the coastal city of Chittagong.

In a separate attack on the same day, a Christian man was hacked to death. Sunil Gomes was found by family members, following the attack on his grocery store close to a church and a Christian neighborhood.

Meanwhile, Bangladeshi police have killed two Islamist militants in Dhaka and one in the northwestern district of Rajshahi. The dead included two "high-ranking" members of the Jamayetul Mujahideen Bangladesh (JMB) group, the police said.

Authorities have launched a nationwide operation on extremists blamed for a series of violent attacks on minorities and activists.

But activist Golam Rabby Chowdhury said the Bangladeshi government had not done much to stop the killings of bloggers and secular activists.

"The attacks on humanist and secular writers and activists have been increasing in the country. Unfortunately, the government's inaction is emboldening Islamists to attack bloggers," Chowdhury said.

Experts say that jihadist groups "Islamic State" (IS) and al-Qaeda are expanding their operations in the South Asian country.

"At the moment, the government of Prime Minister Sheikh Hasina does not classify (at least publicly) the IS as a risk. It needs to come up with a clear and comprehensive assessment of the threat posed by the militant group and the way it is gaining strength in the country," O. Wolf said.