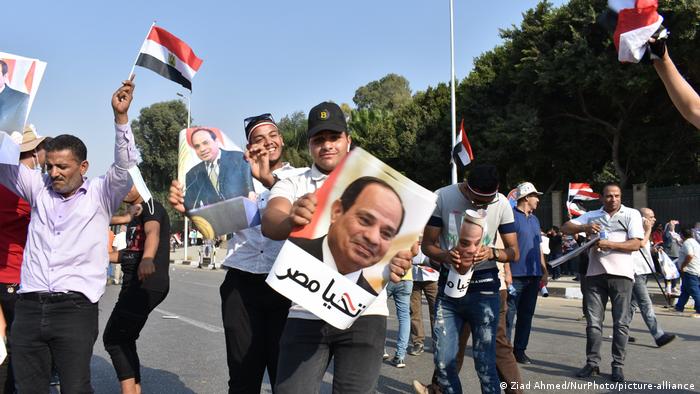 Polls opened in Egypt on Saturday in the first stage of parliamentary elections which are set to be dominated by President Abdel-Fattah el-Sissi supporters.

Nearly 63 million voters out of Egypt's more than 100 million people are eligible to elect 568 of the 596 lawmakers in the lower house.

The first stage of voting covering 14 provinces will end on Sunday, followed by a second stage on November 7-8, covering 13 provinces including the capital, Cairo.

Run-offs will be held in late November and final results are executed in December.

Election authorities said face masks would be handed out to voters free of charge and that polling stations were disinfected. Officials also warned that those who boycott the vote could be fined up to 500 Egyptian pounds (€27, $32).

Egypt’s new parliament will be the second to convene under el-Sissi, a former army general-turned-president.

Read more: Opinion: Is Egypt's #MeToo movement a boon or a bane for women?

More than 4,500 candidates, who are widely seen as el-Sissi supporters, are competing for 284 of the 568 seats reserved for independents under Egypt’s new electoral law. People on eight party lists are running for the remaining 284 seats. El-Sissi will name 28 lawmakers, equal to 5% of the total number of seats in the House of Representatives.

The Unified National List political coalition group, led by the Mostakbal Watan, or Nation's Future party, is among the leading contenders.

The coalition has grown and become a strong political force in the country since el-Sissi entered office. In August, the party won nearly three-quarters of the seats in an election for Egypt’s Senate.

El-Sissi has been governing the North African country since 2014, muzzling any serious political opposition to his leadership. He took office after removing Islamist President Mohamed Morsi in a military coup following protests in June.

Egypt effectively banned protesters under a restrictive 2013 law, and a renewable state of emergency has been in place since 2017.

#MeToo movement takes off in Greece 47m ago