Eintracht Frankfurt have extended the contracts of head coach Niko Kovac and his assistant and brother, Robert Kovac, for two years. Their contract had previously been set to expire at the end of the current season. 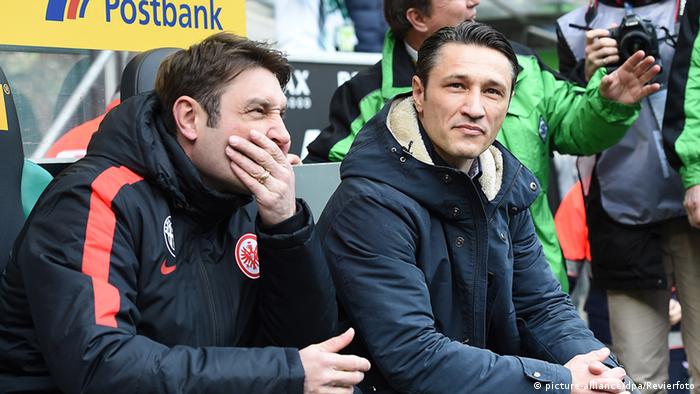 The Bundesliga club announced the contract extension in a statement posted on their website shortly before Niko Kovac (pictured above, right) and the Eintracht Frankfurt board member responsible for sport, Fredi Bobic, spoke to reporters in press conference.

Asked why he and his brother Robert (above, left) had decided to extend their contracts with Frankfurt, Niko Kovac said they both felt that it was a good fit and that they wanted to continue their work in improving the team in the longer term.

"We would like to make Frankfurt better than they have been in the past, but we know that we will have to work very hard to do this," Kovac said.

He also noted that he had Bobic's word that the club would do all it can to attract new and better players to the clubs in the next couple of transfer windows.

Bobic described the extension as an important signal about the club's longer term ambitions.

"We have worked very closely together so far and we intend to continue to do so in the coming months. There is a lot of work to do - and we are looking forward to it.

Nico and Robert Kovac took over the Eagles last March after the previous head coach, Armin Veh, had been sacked with the team mired in a relegation dogfight. The brothers managed to prevent Frankfurt from being relegated, winning a two-game relegation playoff against the team that finished third in the second, Nuremberg. Frankfurt currently sit in fifth place tied on points with Hoffenheim, who they play in Frankfurt on Friday.