Egyptian premier fires football board after deadly soccer riots | World| Breaking news and perspectives from around the globe | DW | 02.02.2012

The leadership of the Egyptian Football Association has been fired following Wednesday's deadly soccer riots that killed 74 people. The European Union has called for an external probe into the violence. 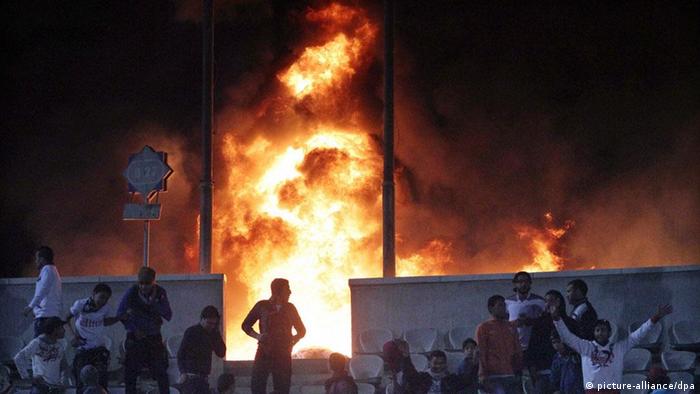 The leadership of the Egyptian Football Association has been fired and the governor of seaside city of Port Said has resigned in the wake of Wednesday's deadly soccer riots that killed 74 people and injured at least 1,000.

Prime Minster Kamal el-Ganzouri told an emergency session of parliament on Thursday that the football association's director and management board had been fired for their responsibility in the violence.

Meanwhile, the European Union has called for an external probe into the riots. "I hope an immediate and independent investigation will shed light on the causes of this tragic event," said European Union foreign affairs chief Catherine Ashton.

In a rare television appearance following the violence, Field Marshal Mohamed Hussein Tantawi, head of the council, spoke by telephone with the state broadcaster owned by Al Ahli, one of the clubs involved in the riots. He vowed to track down those responsible for the country's worst ever soccer violence.

"I deeply regret what happened at the football match in Port Said. I offer my condolences to the victims' families," said Tantawi.

The riots were sparked after a match between Al Ahli, Egypt's most successful club, and home team Al Masry. Al Masry won the game 3-1, and the team's fans swarmed the field, chasing rival players and fans and causing a stampede. 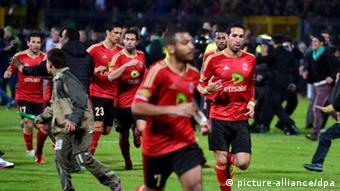 Fans and rioters stormed the pitch several times during the game

Media reports said scores of people were stabbed to death or suffocated trying to flee rival fans armed with knives, clubs and stones. Around 150 people are listed as in critical condition, according to a spokesman from Egypt's Health Ministry.

A minute of silence will be observed at the quarterfinal matches at the Africa Cup of Nations this weekend, in memory of those who were killed.

"African football is in a state of mourning," said Issa Hayatou, president of the Confederation of African Football (CAF), on Thursday, speaking of the close ties the organization had with Egypt. Cairo has served as the headquarters of the governing body since 1957.

FIFA president Sepp Blatter said he was "shocked and saddened" at the violence and casualties, calling it a “black day for football."

"Such a catastrophic situation is unimaginable and should not happen,” he said in a statement.

Al Ahli player and fans caught up in the riots accused police and security personnel of doing nothing to protect them. Manuel Jose, the Portuguese manager of Al Ahli, said he was considering leaving the country after surviving kicks and punches in the violence.

"The blame lies solely with the police," Jose said in a telephone interview with Portuguese television channel SIC. "There were dozens in the stadium, but they all disappeared suddenly or did nothing." 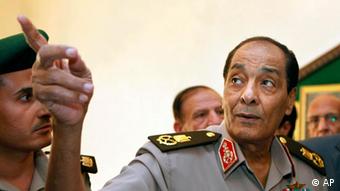 Angry politicians have condemned the lack of security and accused Egypt's military leaders of allowing, or even causing, the fighting. The Muslim Brotherhood, the Islamist group that dominates the newly elected legislature, accused supporters of ousted President Hosni Mubarak of starting the riots.

"The military council wants to prove that the country is heading towards chaos and destruction. They are Mubarak's men. They are applying his strategy when he said 'choose me or choose chaos'," said Mahmoud el-Naggar, 30, a member of the Coalition of the Revolutionary Youth in Port Said.

Opinion: This excessive violence was not an accident

More than 70 people dead; a thousand injured. That was the bloody outcome of riots in Egypt following a soccer game in Port Said. The violence was not an accident, says DW's Loay Mudhoon. (02.02.2012)

Soccer riots in Port Said, Egypt have killed dozens of people and injured 1,000 more. The violence reportedly broke out after the home team beat their rivals 3-1 and fans rushed the field. (02.02.2012)