Egyptian Foreign Minister Shoukry: 'We are the victims here'

On DW's 'Conflict Zone with Tim Sebastian,' Egypt's Foreign Minister Sameh Shoukry rejected claims that his government was not doing enough to ensure the safety of tourists. 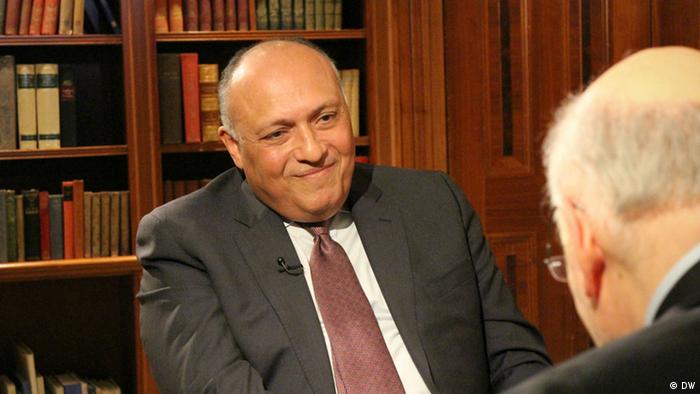 Shoukry said the security situation had stabilized since the military took power in June 2014.

Shoukry commented on last October's downing of a Russian passenger jet in the Sinai Peninsula, which killed 224 people: "Our tourist industry has been sufficiently damaged. (…) The livelihoods of four million Egyptians impacted by this circumstance is something that we bear. (…) We are victims here and we should be treated as victims."

Shoukry said he could not "rule in or rule out" what caused the crash: "There's a lot of speculation, and a lot of hearsay." Western governments believe the airliner was brought down by explosives smuggled on board the aircraft by "Islamic State" militants.

When Tim Sebastian pointed to the increase in terror attacks in Egypt (more than 1,200 incidents have been reported since President al-Sisi took office in 2014), the minister merely retorted: "We have had our difficulties with terrorism as the world has had its difficulties with terrorism," before conceding that, "there is a degree of insistence on the part of some to try to destabilize Egypt. To try to utilize terrorism as a way to subvert the will of the Egyptian people."

Shoukry denied that his country is effectively a war zone, claiming that the "normal Egyptian" was now "much more secure, much more confident in the ability of the government to provide security."

Shoukry dismissed reports from Human Rights Watch and the US government spotlighting rights violations in Egypt. He said he did not take everything Human Rights Watch "says as sacred" and he did "not believe that the White House is the evaluator of the international community."

Born in 1952, Sameh Hassan Shoukry obtained a law degree from Ain Shams University in Cairo in 1975. A career diplomat, Shoukry served as Cairo's ambassador to the US from 2008 until 2012. Since 2014, he has served as the foreign minister in the government of President Abdel Fattah al-Sisi.

DW's Tim Sebastian invites national and international decision-makers to his weekly DW show. "Conflict Zone" airs every Wednesday at 17.30 UTC and is available online on demand.