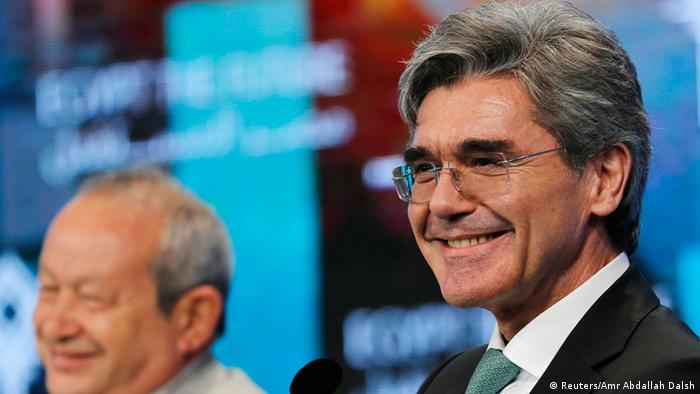 Several major companies announced investment deals during the second day of the international investment conference, which is being held at the Egyptian Red Sea resort of Sharm El-Sheikh.

German industrial giant Siemens agreed to invest 10 billion euros ($10.5 billion) to increase Egypt's energy production capacity by up to a third. The money will go towards building a new 4.4-gigawatt gas-fired power plant in southern Egypt, and a project capable of generating 2 gigawatts of wind power.

"It will create 1,000 jobs and we're ready to start as soon as possible," Siemens chief executive Joe Kaeser (pictured above) said, adding that the accords would supply Egypt with "a powerful and reliable energy system to support its long-term, sustainable economic development."

Egypt faces an energy shortage, and its economy is still struggling after four years of political turmoil following the overthrow of autocrat Hosni Mubarak in 2011. The country's current president, Abdel-Fattah el-Sissi, is hoping foreign investment will help spur economic growth.

The Siemens agreements were signed in Sharm El-Sheikh by Kaeser and Germany's Economy Minister Sigmar Gabriel, who also delivered an invitation from Chancellor Angela Merkel for el-Sissi to make a state visit to Germany.

"Economic engagement here in Egypt is important in order to stabilize the country. This will also benefit Europe and Germany," Gabriel said.

The deal signing comes a day after Egypt announced plans to build an as-yet-unnamed administrative capital halfway between Cairo and the Suez Canal.

About 100 countries and international organizations are represented at the three-day investor gathering aimed at securing billions of dollars for Egypt's economy.

Other major deals were announced by General Electric, Italian oil giant Eni and British Petroleum. The Eni agreement was worth an estimated $5 billion over four to five years to develop oil and gas resources. British energy company BG committed $4 billion over two years.

Oil multinational BP signed an agreement with the Egyptian Petroleum Ministry to start implementing works worth up to $12 billion, including a project to extract gas from the western Nile Delta.

Attracting foreign investment has been a top priority for el-Sissi, who came to power following the military ouster of Islamist president Mohammed Morsi in 2013.

Apart from economic growth, El-Sissi has also focused heavily on stamping out opposition, particularly followers of Morsi and his outlawed Muslim Brotherhood. Hundreds of Morsi supporters have been sentenced to death as part of the wide-reaching crackdown.