Confrontations between detractors of President Mohammed Morsi and his Islamist supporters have turned violent. Despite the clashes, the vote on the contested new constitution is to move forward. 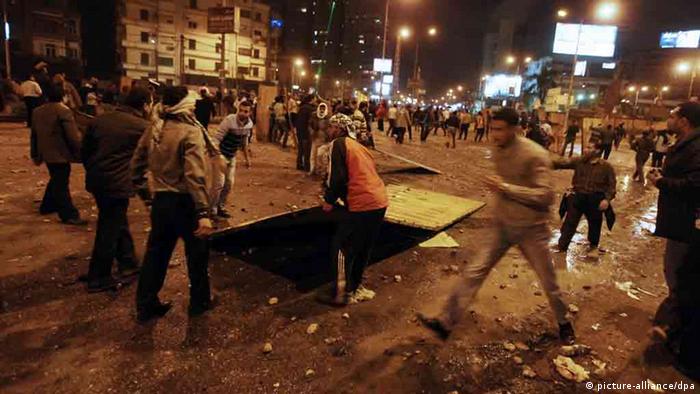 Protesters threw petrol bombs and rocks Wednesday as gunshots could be heard outside the presidential palace in Cairo. Medical officials have reported 211 injuries.

Tension rises in Egypt over Morsi

Islamists tore down opposition tents outside the palace, located in the neighbourhood of Heliopolis, and chanted they would "cleanse" the area.

Clashes broke out between the two sides after Islamists answered a call from the Muslim Brotherhood to march on the palace, where hundreds of anti-Morsi protesters had camped out overnight after a demonstration the previous day that drew thousands.

The protests stem from Morsi's November 22 decrees, which give him sweeping new powers and allow him to put the country's disputed new constitution to a referendum.

Three more of Morsi's advisors quit yesterday over the crisis, bringing the total number of advisers who have resigned since the decrees were issued to six.

Referendum to go ahead

As violence raged outside, Vice President Mahmud Mekki said a December 15 referendum on the constitution "will go ahead on time."

"There will be consensus, and we can avoid disputes," said Mekki.

The vice president added that any objections to the document could be put in writing and discussed by a yet-to-be-elected parliament.

"There is a real political will to respond to the demands of the opposition," he said.

ElBaradei, the former head of the UN nuclear agency, had previously said the Egyptian president's decrees give him the power of a "new pharaoh."

He added that his side would not negotiate with Morsi until the constitutional declaration was cancelled.

"The revolution did not happen for this," said ElBaradei. "It happened for freedom, democracy and human dignity."