Egypt opposition wary of US financial overtures | Middle East| News and analysis of events in the Arab world | DW | 06.03.2013

As Egypt heads toward economic crisis, Washington has begun releasing long-stalled financial aid. But members of the secular opposition are concerned that the US may be getting too cozy with the Islamist incumbents. 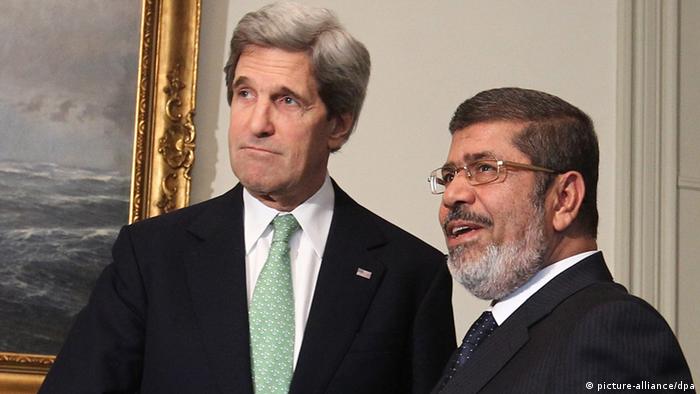 Kerry also pledged another $60 million to help set up a joint Egyptian-American Enterprise Fund to support small businesses. The total $250 million in aid money would be the first installment of a one-billion-dollar package pledged by US President Barack Obama to Egypt in May 2011. 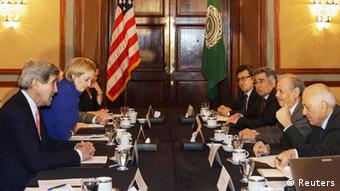 Many leading members of the opposition did not meet with Kerry

Up until now, the disbursement of that money has been delayed due to concerns in Washington about Egypt's volatile transition to a more democratic system. Members of Congress in particular have been worried about Morsi's commitment to peace with Israel, Egyptian security forces raiding NGOs, and anti-American protests at the US embassy in Cairo last September.

"[The US] wanted to make sure power is transferred meaningfully from the military to an elected president," Yasser El-Shimy, an analyst with the International Crisis Group in Cairo, told DW. "Now that Egypt has a president a constitution and parliamentary elections, the US feels much more comfortable giving that money."

Washington has tied the transfer of additional aid money to Cairo completing negotiations with the International Monetary Fund (IMF) over a $4.8 billion loan. The IMF is demanding that Egypt implement a series of liberal economic reforms, which critics say would impact the poor by cutting fuel subsidies and increasing taxes.

"Austerity measures at a time of political instability are simply unfeasible in Egypt," Radwan said. "He's already facing mass civil disobedience in the streets, protests on a weekly if not daily basis, clashes between protesters and security - he does not want to worsen this situation."

At the same time, the US is sending a clear signal that it expects Egypt to continue playing a stabilizing geo-political factor in the region, said El-Shimy. "Washington is content with the way Cairo has managed its foreign policy, particularly in relation to Israel. Washington wishes to reinforce and reward this pragmatism and foster stability in a heavily-populated country in the heart of the Arab Middle East. An economic collapse would bode ill not just for Egypt's democratic tranistion but also for regional security."

During his two day trip to Cairo, Kerry said that "it is paramount, urgent, essential that the Egyptian economy gets stronger." Since the 2011 revolution that toppled Hosni Mubarak, Egypt's foreign currency reserves have dwindled from $36 billion to just $13.6 billion. Meanwhile, the country's budget deficit is on track to soar to between 10.9 and 12.3 percent under the pressure of a badly weakened currency. 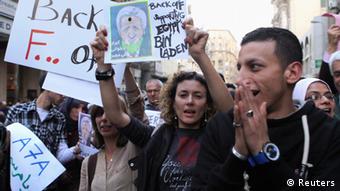 Kerry's visit to Cairo was met with protests by opposition members

"The United States can and wants to do more," Kerry said. "When Egypt takes the difficult steps to strengthen its economy and build political unity and justice, we will work with our Congress at home on additional support."

'Egypt too big to fail'

In El-Shimy's view, the opposition is disappointed that Washington hasn't been more supportive in its struggle with the Muslim Brotherhood. "They had anticipated and lobbied for more US pressure on Morsi to forge a coalition government and amend controversial articles of the constitution. They are trying to send a message to the US that the opposition may take an anti-American stance, unless Washington pays more heed to their demands."

According to Radwan, many members of the opposition believe that the Obama administration has been suspiciously quiet about Morsi's more authoritarian tendencies, such as his November 2012 declaration, which sought to exempt his decisions from judicial review.

Many in the opposition are concerned that with the aid money, Washington is seeking to cultivate a new Mubarak-like figure in Cairo.

"Something like this is viewed as propping up the Morsi government," Radwan said."The fact of the matter is, no matter who is in power, Egypt's economic situation requires that kind of assistance, and I think the US recognizes - please excuse the overused cliché - that Egypt is really too big to fail."

Egyptian protesters have clashed with police in the canal city of Port Said after a funeral procession, injuring several people. Part of a government complex was also set on fire in a second day of violence in the city. (04.03.2013)

Egyptian state media have reported that the retrial of the country's ousted former president, Hosni Mubarak, will begin on April 13. An appeals court granted the retrial, quashing a previous life sentence, in January. (03.03.2013)

Egypt's liberal opposition figure Mohammed ElBaradei has called for a boycott of elections called by Islamist President Mohammed Morsi. The timing of the elections has been changed after complaints from Christians. (23.02.2013)