Egypt's public prosecutor has ordered the arrest of mysterious "Black Bloc" members who have emerged during fatal unrest in recent days. Egypt's army chief has warned of state collapse if widespread strife drags on. 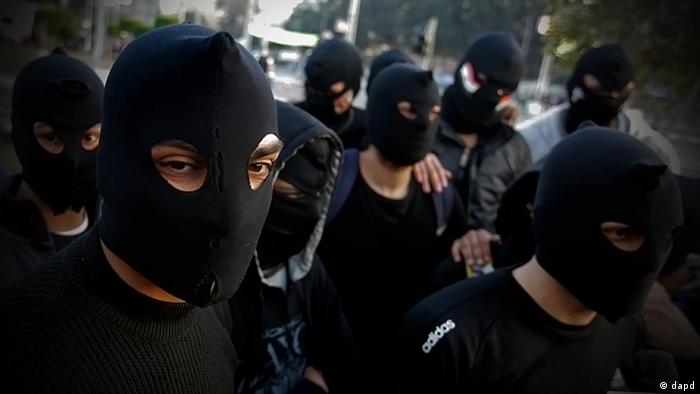 MENA said Abdullahhad accused the bloc of participating in "terrorist acts." The group - on its social network page - said it did not seek to destroy public buildings. "We are not against police, our battle is with the Brotherhood only," said the group, which reportedly modeled itself on anarchist groups of the same name in Europe and the United States.

Violence which erupted last Thursday has so far claimed an estimated 60 lives. Thousands of protestors openly defied a curfew on Monday night as troops were deployed across Ismailia, Port Said and Suez – three cities put under emergency rule for 30 days.

The unrest, which had also gripped Cairo and Alexandria, appeared to wane on Tuesday, although near Cairo's Tahrir Square some youths again hurled stones while police fired tear gas. Street cleaners swept away remains of burnt tires and other debris.

Tanks fanned out in Port Said on Tuesday while funerals were held for several of those killed in clashes. Thousands of mourners chanted "leave, leave!" against Morsi.

Army chief Abdel-Fattah el-Sissi, who is both head of the Egypt's military and its defense minister, said that "continuation of the conflict" could lead to the "collapse of the state and threaten future generations."

He added that one goal of the troop deployments was to protect the Suez Canal that is vital for Egypt's economy and world trade.

"The continuation of this situation, without a solution from all parties, leads to serious consequences affecting the stability of the country," el-Sissi said, adding that "the Egyptian army will remain the consistent and solid pillar of the state."

The US-trained general made his remarks while addressing military academy cadets. His remarks were published on the armed forces' social network site.

Morsi picked el-Sissi in the middle of last year after the sacking of Field Marshal Hussein Tantawi, who had been defense minister for 20 years under ousted president Hosni Mubarak.

The protests flared on Thursday just ahead of the second anniversary of the pro-democracy uprising in January 2011 which led to Mubarak's ouster. Tensions exploded further in Port Said on Friday when a court sentenced to death 21 locals for a mass soccer riot that ended last year in fatalities.

A political scientist at Cairo University, Professor Mustafa Kamel El-Sayyed said Tuesday that the "crisis will not pass easily."

Egypt's recent strife over its new constitution had put "liberals and leftists on one side and Islamists on the other. But this time, the people are part of it, protesting over the deterioration of their living conditions, El-Sayyed told the news agency AFP.

Egypt's largest opposition coalition, the National Salvation Front, has rejected an invitation for a dialogue with Morsi and has threatened to demand early presidential elections.

Morsi was due to go ahead with his planned visit to Germany on Wednesday despite the unrest, presidential spokesman Yasser Ali said.

'You can't turn Egypt into a democracy overnight'

Europeans can do little to help end violence in Egypt, says political analyst Jan Techau. But Mohammed Morsi will not want to create facts on the ground that would make a partnership with the EU impossible. (28.01.2013)

Egypt's main opposition coalition has rejected President Morsi's call for dialogue unless their conditions are met. The opposition's response comes one day after Morsi declared a state of emergency in three cities. (28.01.2013)