Egypt: "Media is a propaganda machine."

The power struggle in Egypt is also being fought in the media. At a discussion held by DW Akademie and the broadcaster ARD, experts looked at how the country's political situation is affecting the work of journalists. 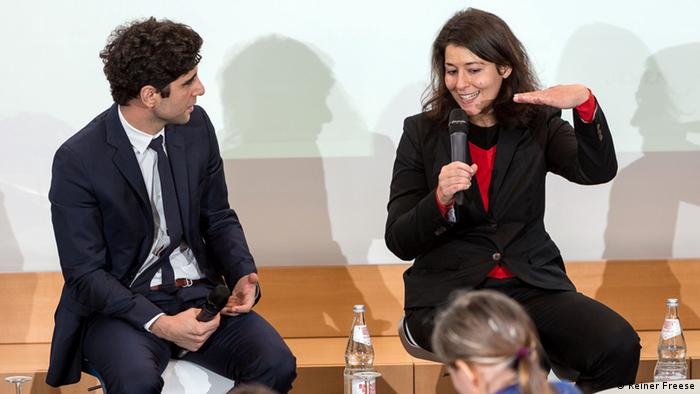 "The Egyptian media has never been free. It wasn't under Mubarak, it wasn't under Morsi and isn't free now," said Mazen Hassan. The journalist took part in the "International Media" discussion round held at the ARD broadcasting house in Berlin. DW reporter and presenter, Jaafar Abdul-Karim, hosted the event. 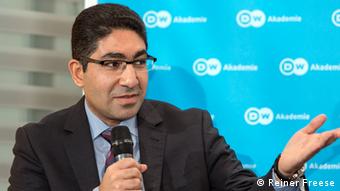 Mazen Hassan is the Germany-based correspondent for Egypt's Al-Ahram newspaper. Given Egypt's current political situation he said the media is little more than a "propaganda machine", with many journalists allowing themselves to be manipulated by the country's respective power holders. Being based in Germany, he said he is arguably less under this influence than some of his colleagues. However after the overthrow of president Mohammed Morsi, Hassan wrote an article about reactions in Germany and also quoted Morsi supporters. His editor chose not to run the story. She is a supporter of the interim government and instead ran a piece about Egyptians abroad celebrating the revolution. There was no space for pro Morsi opinion, she told him.

Jürgen Stryjak, a Cairo-based ARD radio correspondent, is aware that journalists are being exploited and says that at present the media is tending towards favorable coverage of the armed forces chief and Defense Minister, Abdel Fattah al-Sisi. "Some journalists support this kind of reporting and others go along with it simply to avoid reprisals. And although there are also unbiased journalists this is not an easy time for them."

Raniah Salloum, Middle East editor and reporter for Spiegel Online, says many of her Egyptian colleagues are uncertain, not sure of how far they can go in their reporting. "This," she said, "inevitably leads to self-censorship." Jürgen Stryjak agreed. The new anti-terrorism and demonstration laws are so vaguely worded that they automatically silence a lot of critics, he said. "I see this as a major threat to the country's media environment." 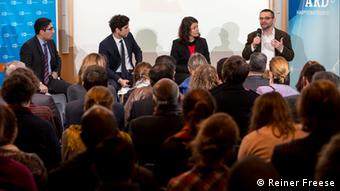 Stryak is facing challenges of a different type. It has become increasingly difficult to extend his residency permit because foreign correspondents are seen as portraying Egypt in a negative light. Anonymous callers have already accused him of this. It has also become difficult to find interviewees. "Things have changed," he said. "People used to be quite open and willing to talk to me but since Morsi was overthrown they've become wary of us."

Raniah Salloum has had similar experiences. Although she can still move about freely in Cairo she finds that the atmosphere can be tense during interviews. "I've had to cancel interviews more than once because mobs had formed around me," she said. 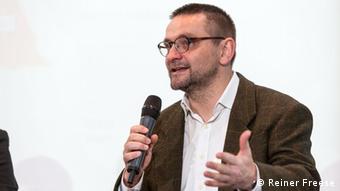 Although Mazen Hassan confirmed there is a general mistrust towards foreign journalists he pointed out that not all German media are providing balanced coverage. He said reports of Mohammed Morsi's ouster, for example, indicated that this was primarily a military achievement and tended to ignore efforts made by the Egyptians themselves. Jürgen Stryjak agreed, saying this was the reason he never uses the word "coup" or the term "Arab Spring" in his reports. "Labels like this aren't part of objective reporting," he said. He’s particularly critical of news agencies which tend to focus on minor conflicts. He pointed to an otherwise peaceful street festival where there had been a skirmish between police and demonstrators. The news wires reported this as "Street battles at anti-Morsi protests" - in his view a distortion of the facts.

As for additional challenges facing the Egyptian media Mazan Hassan pointed to journalists being poorly trained. He credited DW Akademie for contributing to advanced training for media workers and praised the projects being conducted. However, given the low salaries, he said, journalism isn't held in particularly high regard and many journalists therefore aim for permanent positions with state-controlled media organizations. Their motivation has little to do with advocating impartial reporting, he said. But he admitted that this in itself was a challenge. "You can still be prosecuted for expressing an opinion," he said. "What we really need is to first get a sense that we're living in a democracy." 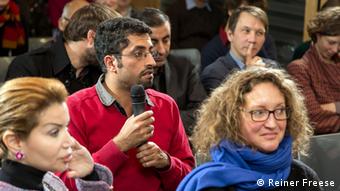 Efforts are being made: there are plans to strengthen freedom of the press in the new constitution and discussions are underway to convert the current state media outlets into private media organizations. However the parliamentary and presidential elections are yet to take place and the type of media policy the new government will ultimately choose remains unclear.


DW Akademie's department for Strategic Communications, together with the German broadcaster ARD, has held regular Media International discussions since December 2011. Each expert discussion focuses on a specific country. The goal is to offer media professionals - and others interested in the media - views on media development in various countries as well as a look at journalists' working conditions there. To date discussions have focused on Azerbaijan, DR Congo/Rwanda, Colombia, Mali, Myanmar, Pakistan, Sudan/South Sudan, Syria and the Ukraine.